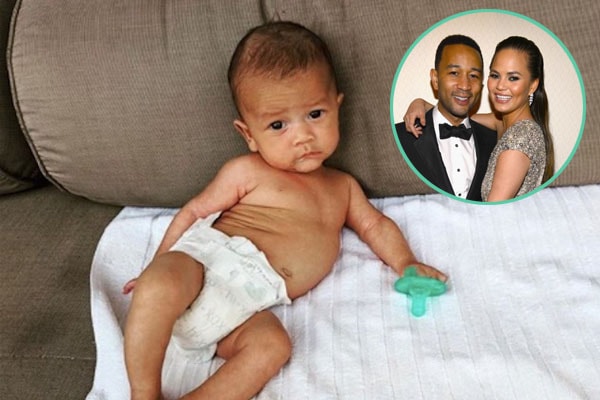 The “All of me” singer John Legend‘s son Miles Theodore Stephens was born on the 15th of May 2018. Miles Theodore was little when he was born as he arrived into this world a few weeks earlier than the due date. John had Miles with his wife, Chrissy Teigen.

Miles Theodore Stephens is not the only kid of John and Chrissy. He also has an elder sister named Luna Simone Stephens.

Even at such a young age, Chrissy Teigen’s son Miles Theodore has got one huge fan following. He has got a fan page on Instagram under the name of “littlelegendmiles.” The account has got over 10.8K followers as of December 2018. It usually uploads videos and photos of the cute Miles Theodore Stephens.

The thing is if such a fan page has got that many followers, then when Miles Theodore Stephens will make his official social media account, there will be millions of fans following it. Perks of being a son of a celebrity.

And at times Miles Theodore’s mama Chrissy also tweets photos of her little one. Well, Chrissy announced the arrival of her kid Miles on her Twitter handle.

As Miles Theodore is the youngest one in the family, he receives an extra amount of love from everyone. After the birth of John Legend’s son Miles Theodore Stephens, John barely went to work, and his wife Chrissy didn’t work at all. Miles Theodore’s father John spent most of his time at home and enjoyed each other’s company.

John Legend stated that he had to make sure that his son slept well, burp him, and changed his diaper. Not just John and Chrissy, but the little Luna Simone Stephens, Miles Theodore’s elder sister is also very close to him.

According to the Latin routes, the name Miles means “soldier” and Theodore means either “God’s gift” or “divine gift.” And as per John Legend, he stated that he named his son Miles after Miles Davis, a renowned American jazz trumpeter.