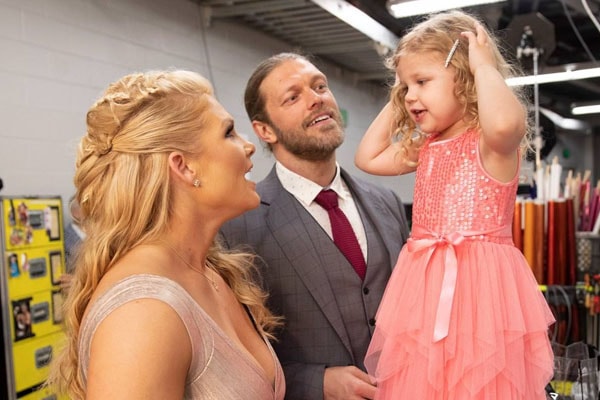 The WWE champion parents, Edge and Beth met in the year 2011 and the relationship flourished after a year of dating. The lovebirds welcomed their first child, a daughter Lyric Rose Copeland after two years of being together and consecutively gave birth to their second child, Ruby Ever Copeland on 31 May 2016. Likewise, the romantic partners and proud parents of two finally decided to complete their family and walked down the aisle together on October 30, 2016.

The young and adorable Lyric has not witnessed a lot of Halloweens. However, the beautiful Lyric Copeland was dressed as Caption Jack Sparrow from the Pirates of the Caribbean this Halloween. Lyric’s little sister Ruby was dressed as Elizabeth from the same movie. Despite not watching the movie and understanding the concepts of the costumes, Lyric enjoyed and loved her costumes. Furthermore, Father Edge confirms that Halloween of 2018 was the happiest Halloween for young Lyric.

Father Edge was ecstatic to see his girls wearing Pirates of the Caribbean costumes and considered the night the favorite night of the year. After all the fame, the glory, and the hype, the Vikings star, and the former wrestler has started finding simple things more rewarding. Edge adores his daughters and shares a strong and intimate relationship with he children and the family.

The almost 5-year-old American beauty, Lyric belong to a famous professional wrestling family and enjoys being with her family. The young and naive Lyric is a daddy’s girl and resembles her father’s strong character and voice of command. However, it is uncertain if the adorable Lyric will be able to beat her opponents professionally.  According to father Edge, Lyric is under no compulsion to chose wrestling as her career.

Ex-Wrestler Adam “Edge” Copeland’s elder daughter, Lyric loves her younger sibling and fulfills her responsibility as an elder sister. The beautiful relationship between the siblings is admirable.

The name Lyric is an American name for a baby girl. The beautiful name is derived from Greek origin and the meaning of name Lyric is “Lyre” which is an ancient Greek stringed instrument.