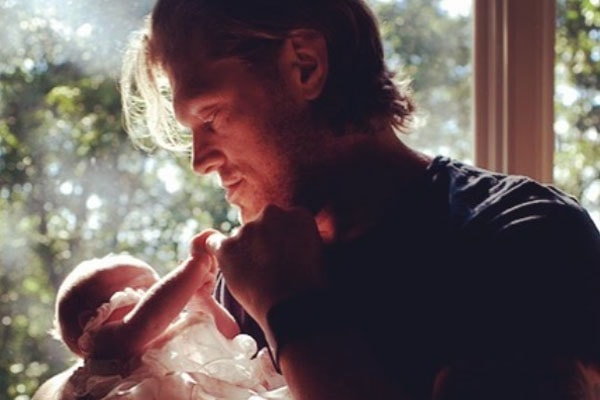 Edge with his daughter Ruby Ever Copeland

Adam Joseph Copeland aka Edge is a proud father of two baby girls. One of Adam “Edge” Copeland‘s daughter Ruby Ever Copeland was born on the 31st of May, 2016. The ex-wrestler Edge had his daughter with wife Beth Phoenix.

As stated above, the former wrestler Edge has got two daughters. The name of Edge’s eldest daughter and Ruby’s big sister is Lyric Rose Copeland. Lyric was born on the 12th of December, 2013.

We have to admit one thing though, no matter how tough these wrestlers act in the ring they have their soft side too. And we get to see that side off the ring alongside their fans and family. When the little Ruby came into the world, The Rated R Superstar Edge tweeted a tweet stating that he has got feelings that his beautiful lil bit would move mountains.

.@TheBethPhoenix and I welcomed our beautiful lil bit, Ruby Ever Copeland on May 31. Look out world, have a feelin she will move mountains

Who knows what’s in Edge’s mind, but he could be planning on making his daughter Ruby Ever a tough wrestler like him and his wife, Beth. Edge and his wife upload a lot of photos of their baby girl Ruby Ever Copeland on their social media account. But for most of the photos, they tend not to reveal the face of their little one like The Undertaker does with his daughter Kaia Faith Calaway. Maybe Edge too wants to keep his princess away from the media spotlight. Once a while though he uploads adorable videos of his little one.

From some of the photos he uploads, we can clearly see how much Edge adores his baby girl. During Halloween, when Adam “Edge” Copeland’s daughter Lyric asked him to dress up as Elsa, he wore it without any hesitance and tweeted the photo.

Ruby Ever Copeland also has got a blonde hair like her father Edge. Plus she also loves to play lawn tennis and go on walks with her family. Ruby’s sister Lyric has nicknamed her “Ruby The Destroyer.”

The name Ruby is a taken name from the gemstone Ruby. It is derived from the Latin Ruber which means red.

As for the name Ever, it is an English baby name which means “strong as a boar.”