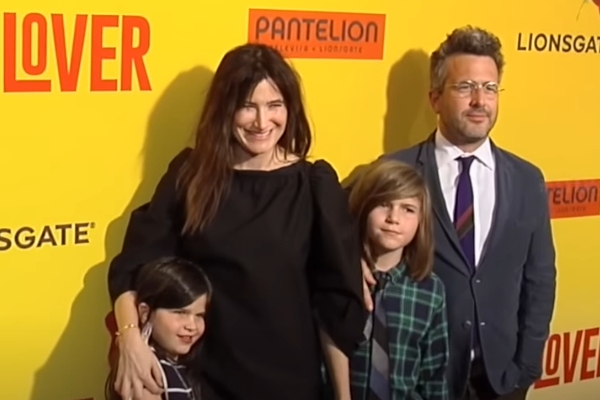 Kathryn Hahn and Ethan Sandler welcomed their daughter in 2009. Read the article to know more about her. Image Source: Social Media.

If you are a fan of Hollywood, you must have heard the name, Kathryn Hahn. Kathryn Hahn is a well known American actress, model, comedian, producer, and singer. She began her career by playing as a grief counselor Lily Lebowski in Crossing Jordan (2001-2007), an NBC crime drama series. And her multidimensional personality has really helped her reach heights over the years.

Hahn has already been part of movies such as How to Lose a Guy in 10 Days (2003), Step Brothers, The Goods: Live Hard, We’re the Millers, Revolutionary Road, Tomorrowland, Captain Fantastic. Apart from all of these feats, she is also popular for voicing the female version of Doctor Octopus in the movie Spider-Man: Into the Spider-Verse (2018). These are all commonly known facts about her, but what about her personal life. How do you think will be the parenthood of this critically acclaimed actress?

Read the article to know more about Kathryn Hahn’s daughter Mae Sandler and the mother-child’s journey.

Actress Kathryn Hahn is married to American actor, writer, and producer Ethan Sandler. You might have heard his name before. The couple had tied their marital knot on January 3, 2002. The couple welcomed their only daughter, Mae Sandler, on July 27th, 2009. But Mae is not the only child of Kathryn Hahn and Ethan Sandler; she also has an elder brother.

Kathryn Hahn’s daughter, Mae Sandler’s elder brother, is Leonard Sandler. Kathryn and Ethan gave birth to their first child in October 2006, after 4 years of their marriage. Mae is three years smaller than her elder brother, but they are each other’s best buddies. They tag along with their famous mom and dad to a number of premieres and award ceremonies. Now let’s know more about Mae.

Kathryn Hahn Has Written A Book With Her Daughter, Mae

As we already know that Kathryn Hahn is also a writer, one of her books revolves around the mother-daughter relationship. Hahn got struck by the idea of this book during bedtime while spending time with her child Mae. Mae becomes an open book during bedtime and shares all her unfiltered thoughts with her mom without any hesitation.

That’s the story behind Kathryn’s first book, My Wish for You. The book is a powerful and heartfelt love letter for daughters around every corner of the world. This book is a reminder for girls of every age that they can be powerful and resilient. This honest book is a reminder that all the girls who are reading the book are beautiful, and they have the strength to overcome any challenges and whilst doing that, embrace their beauty. Apart from this book, Hahn has also written more about the lessons she has learned from her daughter Mae.

As Mae is growing older, Kathryn and Ethan have started being more conscious about their parenting. However, the couple has just hit the milestone what every parent fears. And that milestone is nothing other than swearing. Kathryn revealed this incident in one of her interviews with PEOPLE. Mae was 7 years old when she uttered her first curse world ever. Kathryn added:

“It was not a good one, but it was used correctly. It was used as an adverb, and there was big old ‘ing’ on the end.”

Hearing a curse word from her seven-year-old daughter is certainly not something that she dreamt of, but she knew the gravity of the situation, and as a good parent, she could spot the silver lining.

Hahn also always urge other parents to never be sad about their parenting experience. Parents don’t have to be perfect- just doing everything you can from your part will do. Hahn has starred in the movie Bad Moms which is quite ironic. Cause in real life, she is the best mom Mae, and Leonard could have ever gotten.

Kathryn Hahn’s daughter Mae is a girl’s name of English origin. It means ‘goddess of warmth, springtime, and increase.’