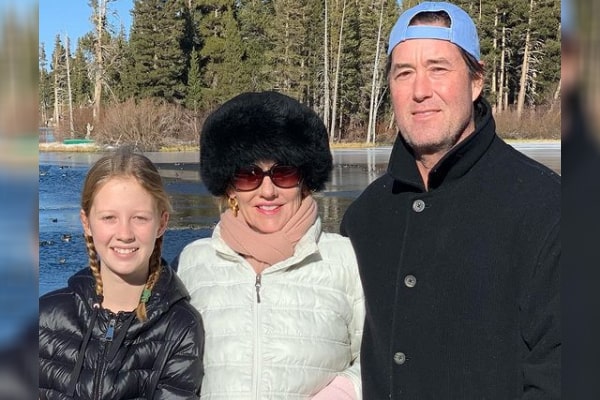 There are a handful of successful marriages in the entertainment world. Among them are actress Penelope Ann Miller and James Huggins. The couple has been together for a decade since 2000. Although there was a time when the pair got strained, the Huggins couple managed to mend the broken and freshen up their marriage.

Second Child In The Huggins Family

Aforementioned, James and Penelope exchanged their vows in 2000 and welcomed two daughters. They had their first kid, Eloisa May Huggins, in 2000.

Similarly, James Huggins’ daughter, Maria Adela Huggins, was born on March 23, 2009. The couple was thrilled to welcome a second baby girl and a little sister to Eloisa. Although there isn’t much about Maria on the internet, she is a constant face on her mother, Penelope’s Instagram.

The second born in the family is often much loved and cherished by all the family members. Thus, Penelope’s daughter, Maria, is also well-loved by her parents and older sister, Eloisa. The youngest in the family is enjoying her life the best.

Furthermore, Jimmy Haggins’ daughter, Maria Adela Haggins, accompanies her parents on their vacations. She even went on her first diving at age 11 alongside Eloisa.

We all know that James Huggins’ daughter, Maria Adela, comes from a family with prominent names and contributions in the film industry. The granddaughter of legendary television pioneer and producer/creator Roy Huggins, actress Adele Mara, Mark Miller, Maria is most certainly interested in the entertainment industry.

Furthermore, Maria’s older sister, Eloisa, is also a budding actress who has been honing her skills at the Michael Woolson Studio. She has been on a few movies, indie films, and learned all types of dances over the decade. Although James Huggins and Penelope Miller’s daughter, Maria, is still young, it is natural for her to spark interest in the show biz.

Furthermore, the 11-year-old girl, Maria, is yet to grow and make career choices, but will she follow in her parent’s footsteps?

What are the odds of a couple having zero differences and arguments? ZERO! Similarly, Maria Adela Huggins’ parents were exposed to such differences and parted ways briefly.

On March 14, 2012, The Artist actress Penelope Ann Miller filed for legal separation from her husband, James Huggins, citing irreconcilable differences. However, after a few months of separation, the couple realized that their problems could be solved quickly and thus did not require a divorce. Therefore, Maria’s mother withdrew her request for separation on June 15, 2012. It was unclear why and how Miller’s heart changed but going through her Instagram and posts, it proves that the couple’s love is more robust than ever.

The Huggins couple got married on 28 May 2000 amidst their friends and families. Interestingly, Penelope was briefly married to comedian Will Arnett from 9 December 1994 until they divorced on 18 January 1995. Nevertheless, Penelope and James are happily married and proud parents of two daughters who are as intelligent as their parents.

Although James Huggins’ daughter, Maria Huggins, is still young and yet to determine her field of interest, we could at least hope to hear more of her in the coming days.

The name Maria has a Latin origin, which means Of The Sea Or Bitter. Similarly, Adela means noble in German.