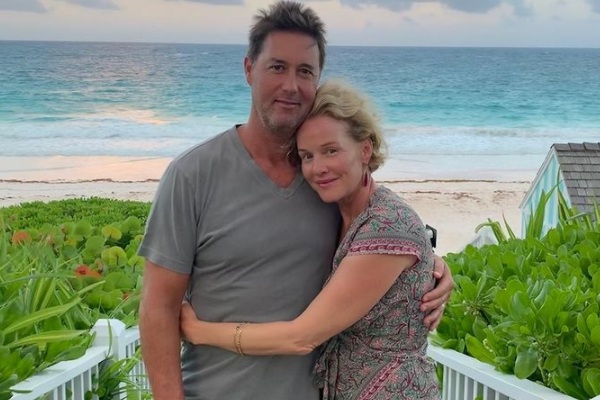 James and Penelope have been married since 2000. Image Source: Instagram/penelopeannmiller.

James Patrick Huggins is an American actor who is known for his role in Carry Me Home. James is married to his wife, Penelope Ann Miller, since 2000, who you may know from movies like Adventures in Babysitting and Biloxi Blues. Penelope has been an actress for more than three decades and is set to appear as the first lady Nancy Reagan in the upcoming biopic of president Ronald Reagan.

The pair had their ups and downs but they never gave up on each other. The couple celebrated their twentieth marriage anniversary recently, so let’s see how the relationship between Penelope Ann Miller and James Patrick Huggins started in the first place.

Actress Penelope Ann Miller married her husband, James Patrick Huggins, in the year 2000. Miller was previously married to Will Arnett from 1994-1995. James and Penelope have been pretty secretive about their relationship. The couple has not revealed how they met, but given that both are into the entertainment industry, they must have met each other through it.

They recently celebrated their twentieth wedding anniversary, so they seem to have a well-understood relationship. In this age, where the couple has it hard to sustain the relationship, James Patrick Huggins and Penelope Ann Miller have been doing great together.

Penelope Filed A Separation From James In 2012

Even though the couple has it easy today, that doesn’t mean they never had their ups and downs. In 2012, according to TMZ, Miller had filed papers in order to call off her separation request from partner James Huggins in a Los Angeles court. But fortunately for both of them, Penelope later called off the separation and decided to get back with him. The reason for the separation filed has not been revealed by both of them, and the same can be said about the change of heart from the actress.

The couple seems happily married now and is always together on vacations. Let’s hope they remain like this for many more years. Penelope had already been through a divorce, and she sure knows how much it can affect as the couple also has children. The beautiful Penelope seems to be on really good terms with James as of now, though, so they seem like they will stick together for some more time.

Penelope And James Were Estranged For Some Time

Penelope and her husband James were estranged from each other back in 2016. The actress had called a restraining order against James in light of his drunken episodes. Penelope kept her daughters Eloisa and Maria away from him due to the very same thing. Huggins had left the family to work on his sobriety, but it seems that it failed, and Penelope had to file a restraining order. The couple is together and seems to be on friendly terms now. James also looks sober now.

The loving pair of James Patrick Huggins and Penelope Ann Miller are parents to beautiful daughters Eloisa May Huggins and Maria Adela Huggins. Eloisa is following in her paren’s footsteps and is seeking a career in acting. The 20-year-old is set to become a wonderful actress like her mother. As for Maria, she is still pretty young and has not yet decided what is she interested in. Both of Penelope and James’s daughters are pretty close to their parents and are often traveling on a vacation.

The family of four spent their quarantine together and now that James seems to be sober, Eloisa and Maria can finally spend some quality time with him. Let’s hope the family stays closely bonded for many more years to come.