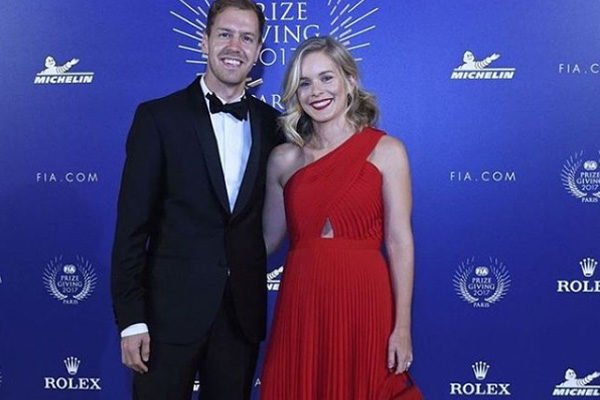 Sebastian had both of his daughters together with his wife Hanna Prater. Hanna is the long-term girlfriend of German F1 racer and the lovely couple tied the knot in June of 2019.

The daughters, Emily and Matilda Vettel, of one of the finest F1 racers of all time, Sebastian Vettel, were born in the year 2014 and 2015 respectively.

Emily and Matilda Vettel’s parents, Hanna Prater and Sebastian have quite an interesting love story that sounds more like a fairy tale. The pair dated back since their teenage years and had been together ever since. Their romantic love blossomed more when they had to continue their long-distance relationship due to Sebastian’s racing career. The love birds couldn’t wait any longer and the inseparable bond turned into a happy married life in 2019.

The adorable couple is very family-oriented and resides in a medieval-style farm-house in Switzerland expanding their small circle by raising their two daughters and a son together.

Despite being a popular figure in the sports arena, Sebastian with his wife is successful in keeping their two daughters away from the limelight. It seems as if they are media-conscious for their daughters and want to enjoy a private life. Moreover, they all seem to support each other in thick and thin. It looks as if Emily and Matilda along with their newly born sibling share quite a bond together.

Sebastian Vettel Is Now A Proud Father Of Three

Formula 1 racer, Sebastian together with his loving wife Hanna were the proud parents of two daughters. The family got expanded when they welcomed a baby boy recently in November of 2019. Emily and Matilda might have been more than happy after welcoming their newly born brother in the family.

The parents are quite famous for keeping their personal life out of their professional life. Hence, the name of the baby boy has been kept a secret for now. Just as that, there is not much information revealed regarding the schooling of Emily and Matilda as well.

Emily Vettel: Emily is a female name of the Roman origin providing the meaning of “Industrious, Striving.”