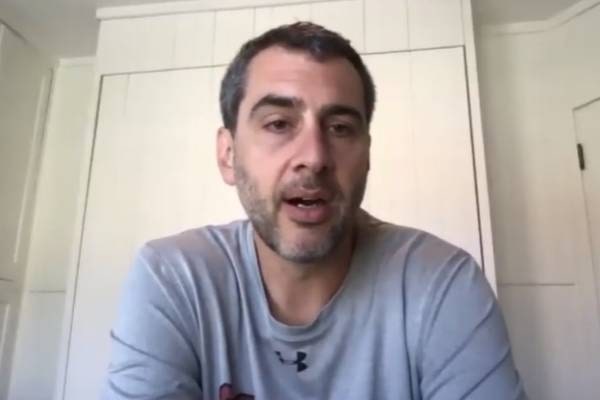 Matt Langel is a three-time winner of Patriot League Coach of the Year. He is the current head coach of Colgate University‘s men’s basketball team, Colgate Raiders. The talented coach has been serving the team since 2011. Before that, Matt served as an assistant coach of two famous collegiate teams, Temple Owls and Penn Quakers, from 2004 to 2011.

Apart from his flourishing career, the former player leads a beautiful family of five, including his loving wife, Tara Twomey Langel, and three adorable kids. Thus, in today’s article, let’s get to know how Matt Langel’s children are growing up. Also, discover if any of them are interested in basketball.

As mentioned above, the Langel pair are doting parents of three babies. Matt Langel‘s daughter, Logan Anne Langel, was born in 2008. The eldest Langel’s mother and father must have been thrilled and excited to welcome her into the world. Moreover, the lovely daughter has two younger brothers, Lucas Langel, aka Luke Langel, and Jackson Langel, born in 2010 and 2014, respectively.

Besides, the Langel family seems to spend a lot of quality time together. In addition, having a bunch of siblings of the same age is a blessing. Likewise, the brother-sister trio doesn’t have much age gap, so they must have grown up as playmates. Apart from that, the beautiful family lives comfortably and enjoys their life to the fullest.

As the kids of such a talented basketball professional, Tara and Matt Langel’s children are bound to inherit the love for sports. It was reported that the head coach’s sons love all things about college basketball. So, the proud dad spends a lot of time watching games with his little boys. As per his father, Lucas is a huge basketball fan, so he watches all the ACC and SEC tournaments.

In 2019, during the SEC tournament championship game, Tennessee Volunteers lost a game against Auburn Tigers. Lucas instantly predicted the Raiders might have to play with Tennessee in the first round. He then offered his father some advice, saying:

We might play with Tennessee, so here is what we should do. Do not let any of their leading scorers ever touch the ball, and we will be good.

Before going against Tennessee, Matt shared the advice his middle child gave at the press conference at Nationwide Arena. It is evident that Lucas is already passionate about basketball.

Langel’s sons are already into basketball. Therefore, we might see them as rising athletes in the coming days. Lucas and Jackson’s dad might have trained them since they were young. Also, could it be the Langel brothers are playing on their school’s basketball teams? At the same time, not much has been disclosed about Matt Langel’s daughter. However, the beloved girl must be focusing on completing her education.

Besides, the Langel couple is raising their babies away from media scrutiny. Although Matt Langel’s wife is active on Instagram, her account is private. Meanwhile, the Raiders head coach rarely appears on any social media platforms. The lovely family must be avoiding unnecessary attention from the public. Hopefully, they are enjoying their lives away from the spotlight.

Nonetheless, all of Matt Langel’s children, Logan Anne, Lucas, and Jackson, are growing up with all the love and care from him and his partner. We might see them pursuing sports interests in the coming days. We wish the Langel bunch a happy life and a successful career ahead.

Logan is of Gaelic origin, which means Little Hollow. At the same time, Anne is the Latin name that means Favour or Grace.

The name Luke is the shortened version of Lucas. The name is of Greek origin that means Bringer of Light. Finally, Jackson is an Old English name that means son of Jack. Meanwhile, Jack means God Is Gracious.