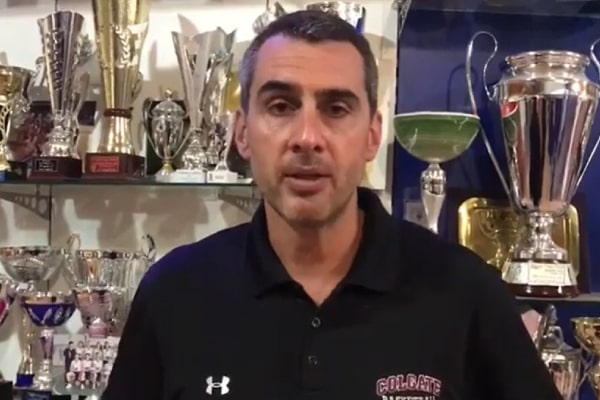 Matt Langel is a household name in the college basketball league. He is the current head coach of the Colgate Raiders men’s basketball team that represents Colgate University in NCAA Division I. The three-time winner of Patriot League Coach of the Year has been serving the team since 2011. Also, he worked with Penn Quakers as its assistant coach from 2004 to 2006.

Alongside the glorious professional career, the head coach leads a beautiful family of five, including his gorgeous spouse and three adorable kids. Did you know Matt Langel’s wife, Tara Twomey Langel, is a former athlete? If not, let’s get to know more about the former player’s better half in today’s article.

Tara Twomey Langel and Matt Langel tied the knot in September 2006. Ever since, the adorable pair have been happily together. Mrs. Langel first met her hubby during her freshman year at the University of Pennsylvania. Apparently, both of them attended the same university. While the coach graduated in 2000, his wife earned her degree in 2003.

Tara and her husband’s relationship didn’t blossom much until the summer of 2002. But in the fall of the same year, Matt went to the Netherlands and joined the Matrix Magixx in the town of Nijmegen. However, the lovebirds kept in touch and talked on the phone often. They got to know each other over the phone.

Twomey even visited her partner several times in the Netherlands. The loving husband repaid the favor with a surprise trip to Tara’s first game of her senior year. Soon after, Matt joined the Penn MBB team’s coaching staff around 2004. Eventually, the couple’s relationship resulted in their wedding in September 2006 in Tara’s hometown of Harrisburg, Pennsylvania.

As mentioned above, Tara Langel is a 2003 graduate of the University of Pennsylvania. The beautiful spouse completed her formal education at Trinity High School in 1999. Later, she earned a full scholarship to Penn. Furthermore, the head coach’s wife had a glorious playing career in high school and recorded 1,000pt club, 119-3-pointers, 510 assists, and 321 steals. Also, the former athlete was named to the PIAA All-State Team twice.

At UPenn, Twomey played under the coach, Kelly Greenberg. She was the starting point guard and led the UPenn women’s basketball team to win their 1st ever Women’s Basketball Ivy League Championship in 2001. Her team went 14-0 in the Ivy League that season and went to their 1st NCAA Tournament. With a 21-game winning streak, the sportswoman’s team held the longest winning streak in both men’s and women’s Division I basketball.

Also Read: Jeff Blashill’s Wife, Erica Blashill – How Did It All Began For The Pair?

Continued Her Career In Basketball

Alongside establishing her career in basketball, Tara is also devoted to her family. Besides, her husband must also support her career. Both Matt and Tara are lucky to have found each other. We wish the lovely pair a lasting bond.

In an interview with The Daily Pennsylvanian, Matt praised Tara as a great girl and said he loves her a lot. Their deep love and understanding must have withstood their long-distance relationship and nearly two-decades-long conjugal life.

The Colgate head coach shares three lovely kids with his better half, Tara. Just after two years of walking down the aisle, the married duo welcomed their first child, Logan Anne Langel, in 2008. After that, Matt Langel’s sons, Luke Langel and Jackson Langel arrived in 2010 and 2014, respectively.

The Langel siblings must be growing up comfortably. As all of them are still young, they might be focusing on their education. Also, the bunch might have inherited the love for basketball from their parents. So, will we see Mike Langel’s children following in his footsteps in the future?

All in all, Matt Langel’s wife is a devoted spouse and a doting mother. The former basketball player is now leading a beautiful family with her husband and babies. We wish Tara Twomey Langel more success and happiness ahead.