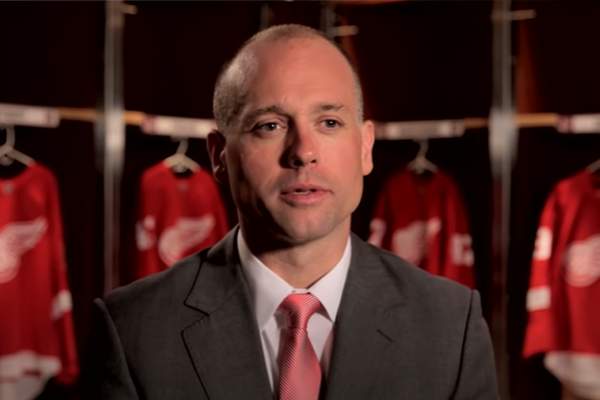 Jeff Blashill is a well-known American professional ice hockey coach who recently was the head coach for the Detroit Red Wings of the NHL. He previously served the Grand Rapids Griffins of the AHL as their head coach. He also worked as an assistant coach for the hockey team at Ferris State University and Miami University.

Along with a successful career in the sports sector, the coach enjoys a blissful marital life with his beloved spouse, Erica Blashill. Many of his fans might be wanting to know about the lucky woman. Hence, today, we will learn more about Jeff Blashill’s wife in this article.

Although the birth details of Jeff Blashill’s partner are unknown, she was raised in New Boston and is an alumna of Gabriel Richard High School in Riverview. She also has three brothers, Nic Williams, Kirk Williams, and Kyle Williams. After completing high school studies, Erica enrolled at Ferris State University in 1993 and graduated in 1997.

Likewise, the 48-year-old coach was also a student, playing for the Ferris State Men’s Ice Hockey Team during that time. He was a two-year starter on the Bulldogs hockey team. And as the title suggests, the couple first met each other while attending the same college. In an interview with NHL, Erica shared how the characteristics that drew her to her husband in their youths were still the foundation of who he is now.

The lovebirds were really young back then, but even so, Jeff took every game utterly seriously. Just like now, he was earnest and driven but had a great sense of humor and a great personality. Furthermore, the pair got married after their graduation and have been together ever since.

After graduating from Ferris State University in 1997, Jeff Blashill’s spouse started working at Alternate Marketing Networks. She worked in Client Services for two years, from 1998 to 2000. Then, two years later, Mrs. Blashill started working as an Assistant Director of Marketing and Promotions at Miami University (OH) Intercollegiate Athletics.

After that, Erica Williams Blashill served for over a year as an Account Executive at Firebelly Marketing. Currently, she owns LEO Marketing, which provides logo design, print layout, corporate identity programs, web design, and more for requested projects. She started her company in November of 2007. It must be contributing to Erica Blashill’s net worth.

The ice hockey coach shares three lovely children with his partner, Erica Blashill. Jeff Blashill’s son, Teddy Blashill, was born on February 3, 2006. Teddy, who is currently sixteen years old, loves hockey and golf and even caddied for his father at the Ally Challenge Celebrity Challenge in 2021. Moreover, he also plays golf and will graduate high school in 2024.

About two years after Teddy’s arrival, Jeff Blashill’s daughter, Josie Blashill, arrived. She is the only little girl of the couple. Though Josie’s birthdate is yet to be revealed, she must be around 13 years old as of 2022. Lastly, Jeff and Erica’s youngest child, Owen Blashill, is three years younger than his sister. Interestingly, all kids have inherited their mom’s shiny blond hair.

Hopefully, we will learn more about the Blashill siblings in the future. Nonetheless, Jeff Blashill’s wife must have been an amazing mother to their kids, and the family likely enjoys a comfortable life with each other. We wish the ice hockey coach and his close ones a life full of happiness and prosperity in the upcoming days.