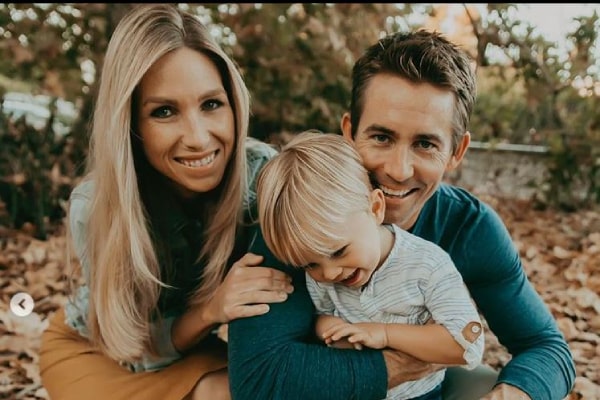 Paul Walker is a name that needs no introduction. The actor lives in the heart of every Fast And Furious fan. Unfortunately, the actor couldn’t continue mesmerizing his fans with his acting because of his saddening death in 2013. Paul was unable to complete his last movie Furious 7, so his brothers Caleb Walker and Cody Walker stepped in for him to complete the movie.

Paul Walker’s brother Caleb came into the limelight from playing his brother’s role and producing a documentary named I am Paul Walker about him. But in this article, we are not discussing his wonderful brother. Rather we will focus on Caleb Walker’s son Maverick Paul Walker who has already started to make headlines from the age of just three.

Paul Walker’s nephew Maverick has already become multi-talented at an early age. The recently turned 3 years old can dive seven feet deep and hit a golf ball fifty yards while also making ten baskets in a row. The kid is looking more than promising to have a bright future.

Maverick’s father, Caleb, is also very proud of his son’s achievements. The two share an incredible bond of father and son, which looks inseparable. They can be seen spending a lot of time together. Caleb sure is blessed to have such a wonderful son in the form of Maverick. At such a mere age, Maverick has already attracted a lot of media attention. We can’t wait to see how he turns out after coming to age.

Maverick Loves To Be In Water

As we already mentioned, Maverick can dive seven feet deep. Going through Caleb’s Instagram, we can see Maverick loves to spend time at the water. He can be seen spending time at the beach, pool, or other water-related places. It must be due to his love of water Maverick is already baptized. The kid looks promising as a swimmer; who knows he will turn out to be a professional swimmer in the future.

Caleb Walker’s son Maverick is sure a multitalented individual inside a cute child’s body. His moments with mother Stephanie Walker is too adorable even to overlook. Let’s hope we get to see a lot of wholesome moments with this mother-son duo in the coming days.

Maverick just turned three last August, as he already looks more than a promising athlete, and what he opts for in the future can vary a lot. He is already an avid swimmer and golfer. While his future is pretty much uncertain, the kid can also follow in his legendary uncle’s footsteps. Caleb has given his son the middle name Paul in honor of his late brother Paul Walker. Caleb Walker’s son must have already watched some of his movies, and as he comes by age, he would surely know how great his uncle was.

Maverick’s father, Caleb, mentioned that he would love to show his kids how he stepped in for Paul in Furious 7 and how great of an actor Paul Walker was. Maverick just started to go to pre-school and is the spitting image of his father. Now, only time will tell how this kid who loves to spend time in Avila’s El Ranchito at Laguna Niguel will turn out to be.