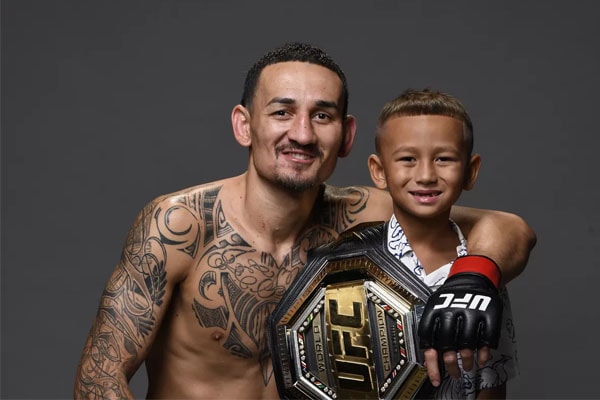 Max Holloway‘s son Rush Holloway aka MiniBlessed was born in 2013. The former UFC’s featherweight champion Max had his son Rush together with his ex-wife Kaimana Pa’aluhi. Rush’s parents Max and Kaimana romantically tied their wedding knot on 14th of February 2012. However, things didn’t go well between the former pair and the two split up shortly after tying the knot on Valentine’s Day.

Rush’s mother Pa’aluhi is a former child actress and a model. Moreover, Max was allegedly dating supermodel Moani Hara. The couple reportedly started dating back in 2014. Moani is a hula dancer and the 2014 Miss Hawaii winner.

Rush had taken the UFC world by storm attending his father’s events. The child of the UFC fighter was really seen emotional after his father’s loss during his fight in the UFC 236.

Rush is known for putting on a show to the camera crew. He is never the one to shy away from the spotlight. Not only that but also cameras caught Rush breaking out some dance moves during his father’s open workout at UFC 231.

Truly, it was really delightful to see a UFC fighter dance with his 6 years old son Rush before he enters the ring even in an MMA fight. Rush cheered the crowd with joy with his excellent dance skills along with his father Max.

The bond between Rush and his father Max Holloway has been one of the absolute blessings. As mentioned earlier, MiniBlessed is cage-side for all of his father’s fights and most of his public appearances.

Just at the age of six, Max Holloway’s son Rush has his own Instagram account. As for now, MiniBlessed’s social handle is run by his father Max aka BlessedMMA. As of September 2019, his Instagram has reached almost 37K followers.

Going through Rush’s Instagram profile, he seems to enjoy a luxurious lifestyle, thanks to his father’s huge net worth. He is often seen enjoying with his friends. Also, Rush loves to learn new things and get along with his companions.

While Max’s fans were speculating a marriage between him and Moan, things did not go as expected. In fact, Max got engaged to another woman named Alessa Quizon, who is a pro surfer.

The UFC heavyweight champion even shared pictures of his precious moments through a tweet. The couple will probably get married soon which will certainly affect the relationship between Rush and his father.

Rush is a male given name of English origin which gives the meaning of “Basket weaver.”