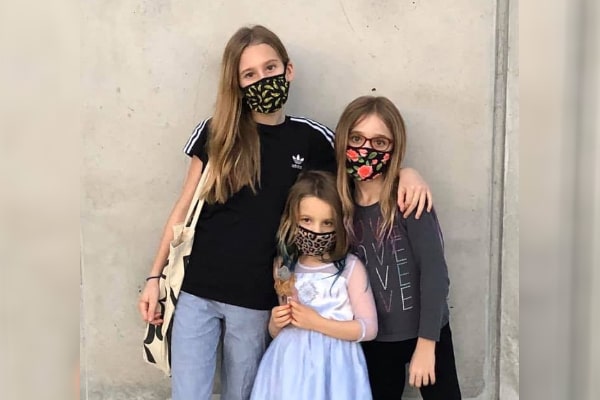 Max Kellerman's children, Mia, Sam, and Esther are growing up rapidly away from the public scrutiny. Image Source: Erin's Facebook.

Max Kellerman is a renowned name as an American sports television personality and boxing commentator. The co-host of ESPN talk show, First Take alongside Stephen A. Smith and Molly Qerim, Max is a devoted family man.

Today, we will be talking about Max Kellerman’s children, Mira, Sam, and Esther with wife, Erin Manning. Let’s go.

Three Children With Wife Of Decades

The 46 y/o talkshow host, Max Kellerman, is married to his wife, Erin Kellerman. Unfortunately, the couple seems secretive about their relationship, which is why we do not have much about their marriage details.

Furthermore, the pair is seemingly protective about their children as Max Kellerman’s Instagram is filled with his professional pictures, and Erin seems to stay away from Instagram.

The pair welcomed three children together, three daughters, Mira Kellerman, Esther Kellerman, and Sam Kellerman. All three children are away from the media scrutiny except for the rare occasions their parents decide to upload their humor.

Max Kellerman’s Daughter Sam Kellerman Is Named After His Brother

Known for a brief appearance in Creed, Max Kellerman named his daughter, Sam, to honor his brother, Sam Kellerman. His brother was murdered by former boxer, James Butler on October 17, 2004. Kellerman’s brother’s body was found inside his apartment. Butler later confessed to the murder and was given a 29-year sentence.

Max Kellermans’ brother, Sam, was an aspiring artist and hosted a public-access cable-television show at that time. He reminisces him as a creative genius who had written a play called ‘The Man Who Hated Shakespeare.’  Furthermore, he revealed that his brother wanted to direct a film and was in several national commercials.

Max believes that his brother was the best writer for his age and was deeply shaken by Sam’s death. Therefore, to commemorate such a significant influence in his life, Max Kellerman named one of his daughters after his brother, Sam. Let’s hope she fulfills his uncle’s dream as she grows up.

Max Kellerman’s Daughters Are Growing Up

Aforementioned, Max Kellerman and his wife, Erin, are very protective of their children. Therefore, they rarely make posts about them.

Interestingly, Mrs. Kellerman has pinned her memory while giving birth to her eldest daughter. She watched the presidential election speech of Barack Obama while in labor.

My firstborn was born 9 years ago today. I watched this while I was in labor. It was a good day. https://t.co/TxhT4U4ePE

Well, Erin uploads quite a few pictures of her daughters enjoying their time together. They are all beautiful and inherited their parents’ blonde hair and beautiful eyes.

Furthermore, Kellerman prioritizes his daughters a lot. Despite having a hectic schedule, his wife would not make him feel left out.

Moreover, Max Kellerman’s children are growing up very rapidly and away from media scrutiny. Maybe that’s the goal, but let’s hope they flourish to outshine their father in the coming days. Furthermore, Max also wants his children to carry on the tradition of Yiddish, and be like him in some way.

The name Mira is of Latin origin, which means admirable, or peace. Likewise, Esther means star in Persian. Similarly, Sam means the name of God in Hebrew.