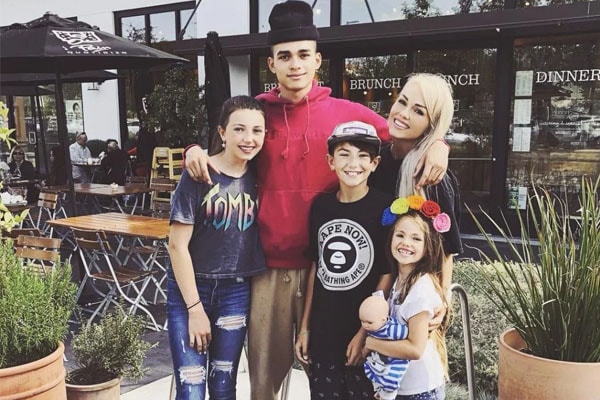 Kandee Johnson is a famous YouTube personality and beauty vlogger. She is originally from Los Angeles, CA and has reached almost 4 million subscribers on her YouTube channel. Let us meet all of the four children of Kandee.

Jordan Johnson Is The First Born Child Of Kandee Johnson

Kandee Johnson’s son Jordan Johnson was born on 19th of February 1997. The 22 years old Jordan is mostly known as the first-born son and child of celebrity make-up artist Kandee Johnson.

Following his mother’s footsteps, Kandee previously experimented with being a YouTuber. He titled his channel name as The Guy Boys alongside his friend Ryan Librada. However, it did not work and he removed his YouTube channel.

Besides that, Jordan seems to be an emerging model and has debuted his modeling career through New York’s Fashion Week. Not only that but, he has also appeared on the Vogue magazine. Jordan’s mother, Kandee was one of the happiest souls and the first one to congratulate him.

Blake Johnson Was Born In 2007

Alani Johnson Is The Eldest Daughter Of Kandee

The gorgeous Alani is Kandee’s eldest daughter. She has her own Instagram account where she mostly posts pictures relating to herself.

Excluding Jordan, all of Kandee Johnson’s children don’t appear on media that much. Alani, Ellie, and Blake Johnson live a life far away from the media limelight.

As the sources claim, Kandee’s ex-husband had requested her not to show the faces os her children anywhere except their custody judge.

But in January 2011, Kandee shared a video on her second YouTube channel where she introduced unborn Ellie to her fans.

Gorgeous Kandee Johnson, best known for her flawless makeup tutorials, is a single mother of her four kids. On her personal blog, Kandee has talked about her tumbling marriages and has also stated her feelings as if her dream was over. Kandee has been married twice and had her first child Jordan at the age of eighteen. However, Kandee hasn’t mentioned the names of any of her ex-husbands.

Alani Johnson: Alani is a modern 21st-century girl’s name of Hawaiian origin which means “fruit.” However, it also gives the meaning of “awakening.”

Ellie Johnson: Ellie is a girl’s name of Hebrew origin which gives the meaning of “God is my light.”

Jordan Johnson: Jordan is a male given name of Hebrew origin which means “to flow down or to descend.”

Blake Johnson: Blake is a boy’s name derived from a Gaelic word “blath” which gives the meaning of “flower, blossom or prosperity.”