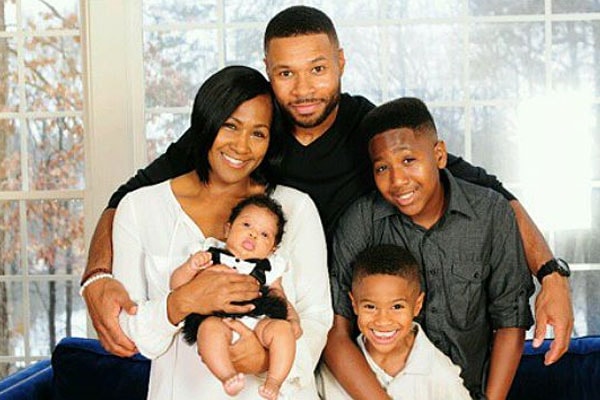 Terri J. Vaughn is a mother of three children. Her children are named Lola Riley, Daylen Ali Carolina, and Kal’ El Joseph Riley. The actress has been married twice as of 2019. First, she got married to Derrick Carolina back in 1999. The former couple shares a child together named Daylen. However, things didn’t go well for the exes and settling their differences they got divorced in 2005.

Nevertheless, Terri went on to fall in love with former football player Karon Riley. The lovely couple tied the wedding knot in 2008. The love birds are together ever since. They share two adorable children together; Kal’ El and Lola. Now, let us get to know more of all the three Terri J. Vaughn’s children.

Daylen Ali Carolina Is The Eldest One

Terri J. Vaughn’s son Daylen Ali Carolina was born in October of 2001 and is the eldest child of his mother. As mentioned before, he has two half-siblings named Kal’ El and Lola from his mother’s second relationship with Karon.

Daylen’s parents, Terri and Derrick fell in love when they were studying at California State University. They got married when Terri was almost 29 years old in 1999. Unfortunately, Daylen Ali’s parents ended their marriage after 6 years in 2005.

The handsome Kal’ El is the middle child of Terri which she had together with her current husband Karon. Kal’ El’s parents, Terri and Karon started dating back in May 2007. And almost after eight months on 19th of January 2008, the adorable couple exchanged their wedding vows. Terri J. Vaughn’s son Kal’ El was also born in the same year, that is in 2008.

Kal’ El was born about two and a half weeks prior to his estimated birth. He weighed in at 7 lbs, 6 oz, and was 19.5 inches long at the time of his birth. His mother told:

I think the name is very fitting for him(Kal’ El) — he’s strong,  and just perfect. I could tell evenwhen I was carrying him inside me cause he made me feel like Superwoman! He looks just like his daddy.

Kal’ El’s elder half-brother Daylen was also very excited during the time of his birth. Daylen couldn’t keep his hands off his younger sibling Kal.

Lola Is The Only Daughter In The Family

The third and youngest child of the actress Terri is the only daughter in her family. Terri J. Vaughn’s daughter Lola was born in 2014 in Los Angeles, California. She loves to travel to beautiful places along with her parents and siblings.

Daylen Ali Carolina: Daylen is a male given name of English origin that provides the meaning of “Angel from God.” Whereas Ali is a masculine name of Arabic origin which gives the meaning of “high, elevated, or champion.”

Lola Riley: Lola is a female given name from Spanish and German origin meaning “lady of sorrows.”