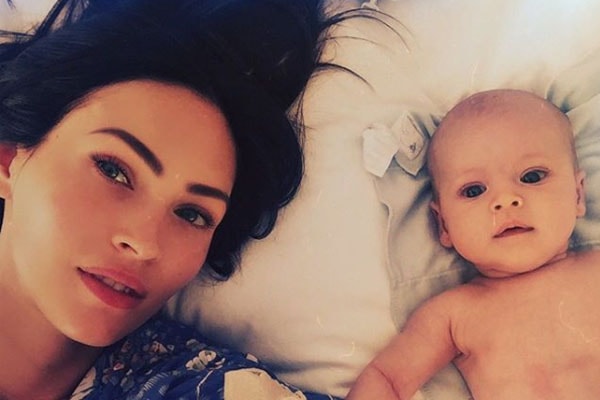 Megan Fox has got a total of three children, and all of them are boys. On the 4th of August, 2016 Megan Fox welcomed her third son Journey River Green. The names of her other sons are Bodhi Ransom Green and Noah Shannon Green. Megan Fox’s sons got their last name “Green” from their father, Brian Austin Green.

The stunning actress doesn’t need much introduction as we all know how much of a big superstar Megan is. And just like her, Megan Fox’s husband Brian Austin Green is also an actor. He is famous for his role of David Silver on Beverly Hills, 90210, an American TV series.

Like many celebrity parents, Megan also tends to keep her sons away from the limelight. Megan Fox being spotted with her children is a rare occurrence. Plus at times she also uploads the photos of her young ones on her social media handle. Like Megan actor Matthew William Goode also keeps his daughter Matilda Eve Goode far from media.

When Megan Fox uploaded the photo of her youngest son, Journey River Green most of her fans went into awe. As we all know how stunning the “Transformers” actress is, well, her son is no different. The young Journey has definitely inherited the looks of his mother. And the blue eyes are an exact replica of Megan’s.

In the photo uploaded on Instagram, we can see the cute Journey slaying the Teenage Mutant Ninja Turtles t-shirt. Plus his mother Megan has also acted in the movie TMNT.

Megan revealed the photo of her youngest son Journey only after three months of his birth. She did the same with her older boys; her fans had to wait for a while to catch a glimpse of Megan Fox’s sons.

There is no doubt that Megan Fox’s son Journey River will grow up to be a good looking young man. He indeed has received the great genes of his parents.

Apart from her adorable sons, Megan Fox has had a tough journey with her married life. Megan Fox has been married to Brian since 2010. Though it’s been over a decade for them being together, Megan Fox filed for a divorce in 2015 although she later reconciled.