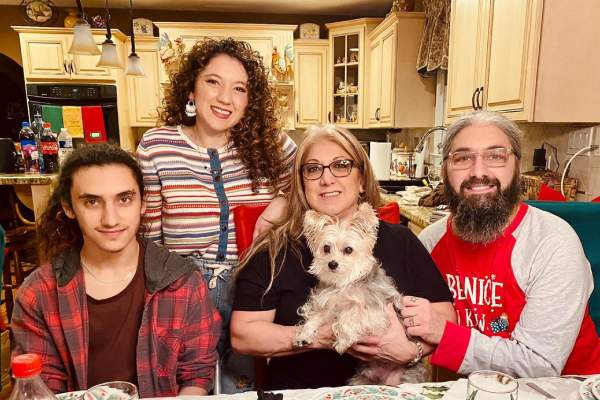 Mike Portnoy, born Michael Stephen Portnoy, is an American musician, best known for being the former drummer of the progressive metal band Dream Theater. He was one of the founding members who also provided the band with backing vocals. He left Dream Theater in 2010 after being with the group for twenty-five years.

The musician has seen much success even after his departure from the band. Aside from having a successful career, he enjoys a delightful life with his wife, Marlene Portnoy, and his two kids. For now, we will learn more about Mike Portnoy’s children in this article.

Three years after tying the knot on July 30, 1994, Mike Portnoy and his spouse, Marlene, decided they were ready to welcome a new member into their family. They had their first child, a little girl named Melody Ruthandrea Portnoy, in May of 1997.

Mike Portnoy’s daughter is an actor and singer. Being raised by two musician parents, she spent most nights sleeping in a tour bus bunk than on an actual bed. She grew up on roads to tours and events and gained a love for music and performing at a young age. Melody started competing in vocal competitions at the age of 7 after taking private vocal lessons.

After finishing her high school studies, the 24-year-old discovered her love for musical theatre. She then moved to attend the New York Film Academy for Musical Theatre and Film/TV Acting. Since graduating from NYFA, she has made her 54 Below debut, Off-Broadway debut, recorded the original demos of Psykidz by Bobby Cronin, and participated in multiple readings of developmental new musicals.

Additionally, the talented singer also performed as Olive Ostrovsky in the 25th Annual Putnam County Spelling Bee, Kathrine Plumber in Disney’s Newsies, Catherine in Pippin, Hermia in A Midsummer Nights Dream, and many others. Furthermore, Melody has also trained on-screen acting. She has wrapped an upcoming indie feature film where she acts in the role of a leading role.

Aside from her musical career, Melody is in a blissful romantic relationship with her partner, Chris Bailey. Melody Portnoy’s boyfriend is also an actor based in NYC. Mike Portnoy’s baby girl and her lover gush about one another on their Instagram handles.

An interesting fact about Melody Portnoy is that she is a self-claimed Beatles enthusiast. On her resume, she has added that she could name any Beatles song to have ever been written within four seconds or less of hearing it as her special skills.

Two years after Mike and Marlene welcomed their eldest daughter, they had their second child, Max John Portnoy, in May of 1999. As the title suggests, Mike Portnoy’s son is also a drummer. Max started playing the drums when he was about three years old before eventually taking it seriously around the age of five. Just like his sister, he also grew up on the roads and was inspired to follow in Mike’s footsteps and become an instrumentalist.

When Max was in first grade, he met Kris Rank and Ryland Holland, who were also heavily interested in music. Kris played the bass and Ryland played the guitar, and the boys started playing together. The group remained the same until around the sixth grade, when they met Thomas Cucé, who was added as a vocalist and keyboardist.

Together, the four kids decided to form a band named Next To None in 2014. Afterward, Mike Portnoy’s son began playing drums as a member of Tallah. Furthermore, he also plays for the Code Orange as their current live drummer.

Besides his career as a drummer, Max is in a happy and healthy relationship with his lady love, Alex Snowden. Max Portnoy’s girlfriend is also his bandmate, who plays rhythm guitar in Tallah. The couple often posts about each other on their social media handles.

Thanks to their prospering professions, Max Portnoy and Melody Portnoy must have amassed a considerable fortune. On the other hand, their dad, Mike, has an estimated net worth of $8 million.

Well, Mike Portnoy’s children seem to be doing great in their careers and also appear happy with their lives. Nonetheless, we wish them even more success and happiness in the upcoming days.

Melody is derived from the Greek word μέλος (Melos) and means “song.”

Likewise, Max is derived from the name Maximilian and is of Latin origin, which means “greatest.”