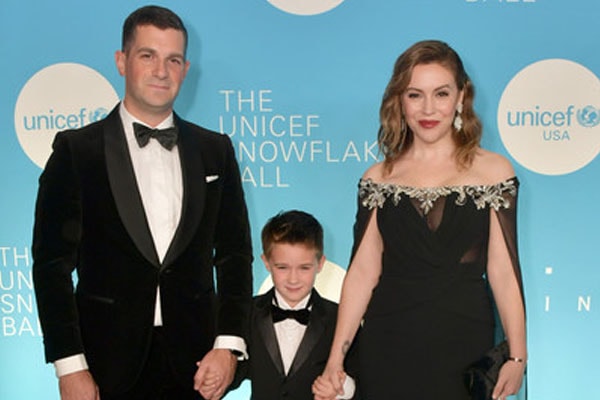 Alyssa Milano‘s son Milo Thomas Bugliari was born on the 31st of August 2011. Alyssa had him with her husband Dave Bugliari whom she got married on 15th of August 2009. The romantic couple’s wedding ceremony was held at Bugliari’s home in New York Jersey with a couple of family members, friends and few guests in attendance.

Elizabella’s mother Alyssa Milano is an American actress who is best known for the TV show Who’s the Boss. Her father Dave Bugliari works as an agent for the Creative Artists Agency.

Milo Thomas Bugliari Is The First Child Of Alyssa Milano

As mentioned earlier, Milo is the eldest child in the Bugliari family. During his birth, Alyssa was the happiest mother as she took to her twitter page to share the joy for the newborn. She quoted:

“My heart tripled in size and I love my son more than the leaves on all the trees.”

Not only that but, Milo’s father also loves his son very much. According to US Magazine post in 2011, Dave couldn’t stop to carry around and play around with his baby boy.

The Bugliari family was completed and has been more joyful ever since Milo’s parents welcomed a new baby girl Elizabella in 2014. The family seems to enjoy holiday and weekends traveling to exciting places.

Alyssa Milano’s son Milo is in his early childhood and he might be in an elementary school.

One perk of being a celebrity’s son is that you get to attend numerous events. Milo’s mother Alyssa Milano is a human activist who also works for UNICEF. She once chose to bring her husband Dave and their son Milo to the star-studded evening of Annual UNICEF Snowflake Ball.

Alyssa mentioned her son Milo in her quote, “What better way to spend the evening, where Children helping Children. #StartsWithU.” And by that, we are likely to see the young Milo in many upcoming occasions.