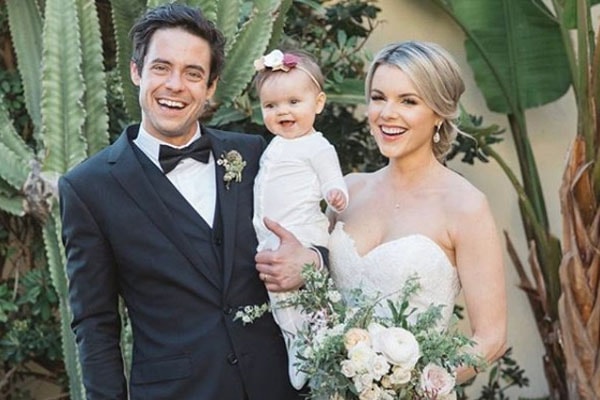 The former “Bachelorette” Ali Fedotowsky‘s daughter Molly Sullivan Manno was born on the 6th of July, 2016. At the birth, the little Molly weighed in at 7 pounds 6 ounces and measured 22 inches long. Molly is Ali’s first-born with husband, Kevin Manno.

Molly is not the only child of Ali Fedotowsky and Kevin Manno; she has a younger brother named Riley Doran Manno. The cute Molly is slowly growing up and looks like a mini version of her mother, Ali.

Since her very early days, Ali Fedotowsky’s daughter Molly Sullivan Manno has been a cutie pie, and nobody denies the fact. She has got her own Instagram account under the username of “mollymanno” and has acquired over 36.2k followers as of November 2018, which is way more than her little brother’s followers. Her Insta wall is filled with photos of her self alongside her parents, Ali and Kevin.

As we all know, Molly Sullivan’s mother Ali Fedotowsky is a former Bachelorette star, and Molly’s Insta’s description gives us a hint that in the future she too might be joining the platform. Molly’s Instagram has a description of ‘My mommy thinks I’m a future Bachelorette.’ So it looks like Ali is also planning on making her little one join the series when she is all grown up.

As stated earlier, Molly has a younger sibling named Riley, and it looks like both of them are causing trouble to their mother, Ali. The 34-year-old reality TV star Ali stated that she and her husband Kevin Manno haven’t slept in the same bed for some time now.

According to Ali, after the birth of her second child, life has been difficult for the couple. She further added if someone had told her that it’d be difficult to raise two children then she would have waited a little longer. Poor Ali Fedotowsky, we hope she is able to cope with the troubles now.

The meaning of the name Molly is derived from the Gaelic name Maili which means bitter.

As for the name Sullivan, it is an anglicized form of Gaelic word O’Súilleabháin which means dark-eyed or hawk-eyed.

“So wait… they just GIVE me candy for knocking on the door?!?!” – Molly just seconds after trick or treating at her very first house ever ? ? pic.twitter.com/BnjiOV61cw