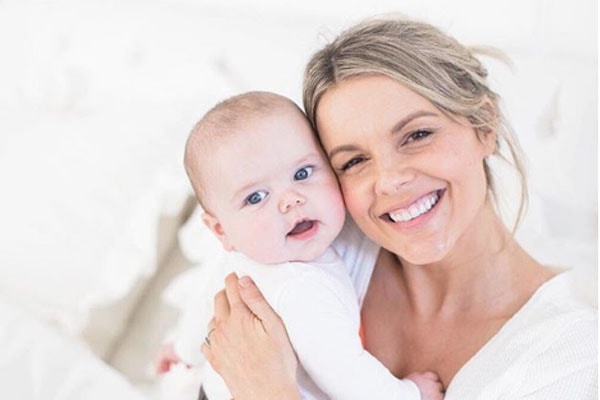 The American television personality Ali Fedotowsky‘s son Riley Doran Manno was born on the 24th of May 2018. During the time of birth, Riley weighed in at 8 pounds, 11 ounces and was measured 21.5 inches long.

Riley is Ali Fedotowsky’s second child which she had with husband Kevin Manno. The cute Riley also has an adorable elder sister named Molly Sullivan Manno.

As we know how much beautiful The Bachelor star Ali is, we have to admit one thing though that she has given birth to an adorable boy. The fair complexion of his and that cute smile fits perfectly on Ali Fedotowsky’s son Riley Doran Manno.

The little Riley is somewhat of a social media star. He has got over 10k followers on his Instagram handle and only time will tell us how much more it will rise to. People must be wondering how can such a little baby have his own Instagram handle, well, worry not, either of his parents probably run it. As for the time being, Riley’s newsfeed is filled with his lovely photos alongside his father Kevin Manno and mother, Ali Fedotowsky.

For the time being Ali Fedotowsky’s son is just enjoying being cute. He is too young to decide his future yet. But in the near future if he chooses to enter the world of entertainment, then his mother will be glad to help her little one.

Dilemma on The Name

According to Fedotowsky, it was difficult for her alongside her husband Kevin to name their son. In her blog, Ali wrote that they were going back and forth between Miles and Henry. So they decided to wait until Riley was born and when they first saw him at that time, both agreed on the name Riley.

Plus both of Riley Doran Manno’s parents revealed the meaning behind the name of their son. According to Ali Fedotowsky, they decided to name their son Riley as a tribute to all their siblings. Riley (short for Ry) is for he sister’s name Raya and Kevin’s brother Ryan, and as for Doran, it is Ali’s grandmother’s last name.

The Riley is a baby name which means valiant.

As for the name Doran, it is the diminutive form of ‘deoradh’ meaning stranger or pilgrim.