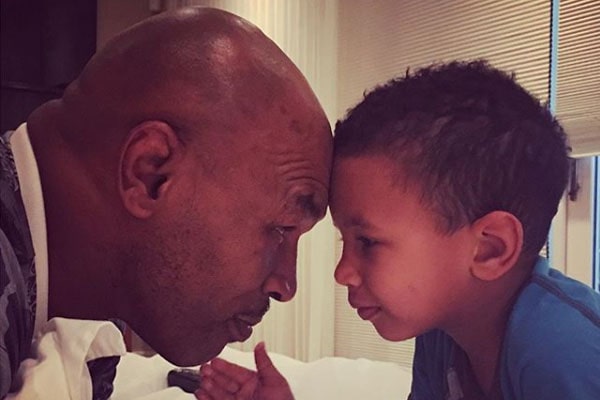 Mike Tyson‘s son with his wife, Lakiha Spicer, is Morocco Elijah Tyson and was born on Jan 25, 2011. He brought happiness and joy in his parents’ life with his arrival in the world. Morocco’s dad, Mike Tyson, is a former American professional boxer who made a brilliant and stunning career. Morocco’s parents married each other in 2008.

Morocco Tyson has an elder sister named Milan Tyson. He also has five half-siblings, and they are Miguel Leon Tyson, Mikey Lorna Tyson, Exodus Tyson, Rayna Tyson, and Amir Tyson. They are Mike Tyson’s children from his previous relationships. So, getting back on track, let’s not waste any further time and know more about Mike Tyson’s son, Morocco Tyson.

In 2018, Mike Tyson with his kids, Morocco, Milan, and Miguel with his beautiful wife, Lakiha showed up in Kids’ Choice Awards Orange Carpet. Well, Mike Tyson is a family guy indeed and loves his family more than anything in the world. He loves to spend precious time with his son and daughter often.

Mike Tyson’s son, Morocco was born weighing in at 8 lbs 13 oz. He brought tons of happiness along with him. Morocco has already become the heartthrob in the spotlight and media. Mike and his wife, Lakiha are not leaving a spot to make their children happy all the time. Since the boxing champion’s net worth estimates over $3 million, Morocco’s life must be a splendid one.

Similarly, the father-son duo is tennis and boxing buddies. Mike Tyson’s son, Morocco is so far showing interest in such sports and perhaps he could continue his dad’s legacy in the future. So, in all, Mike and Morocco, playing tennis and boxing together are like bonding time for both of them. Mike is his best-friend and plays with him to make him happy too.

Adorable Morocco Tyson is close with his half-siblings too. All of his elder siblings probably just can’t get enough of Morocco. We can say that Morocco Tyson is very fortunate to be Mike Tyson and Lakiha Spicer’s son.

He has also met the rising French footballer, Kylian Mbappe. The two of them hung out and Morocco sure did enjoy being with the football star. It’s usual for him to meet popular celebrities as he is the greatest, Mike Tyson’s son.

The little kid pretty much living the best life that most people keep on day-dreaming. Having a verified Instagram at such a young age is very surprising. But as Mike Tyson’s son, there’s certainly no word like impossible in his dictionary. Plus only time will tell us whether or not Morocco will step in the boxing ring and become one of the greats like his father or not.

The name Morocco is of African origin, meaning ‘The Western Kingdom.’ Elijah came from the Hebrew name ‘Eliyyahu’ meaning ‘my God is YAHWEH.’