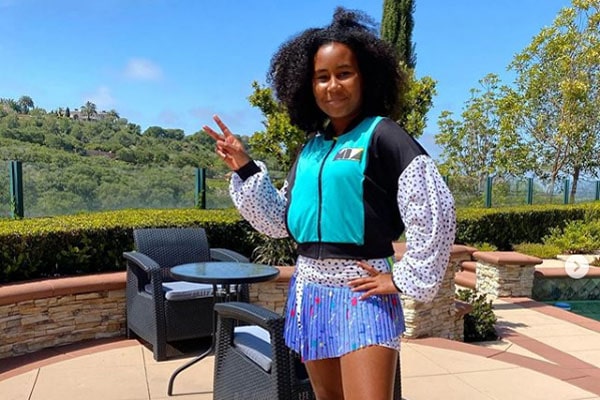 Mike Tyson is one of the greatest professional boxers and had a successful career. Well, going through his personal life, he married his wife, Lakiha Spicer, in 2008. The married couple welcomed their first child, Milan Tyson, on December 26, 2008.

With Milan’s birth, she brought lots of happiness and joy to the family. She has a small brother named Morocco Tyson. Similarly, she also has five half-siblings, Miguel Leon Tyson, Mikey Lorna Tyson, Exodus Tyson, Rayna Tyson, and Amir Tyson.

Her half-siblings are Mike Tyson’s children from his other relationships and affairs. So, let’s come back to the topic and know more about Mike Tyson’s daughter, Milan Tyson.

Well, one of Mike Tyson’s children, Milan Tyson, is flourishing as a tennis player day by day. She was fascinated by the game from her childhood days. Mike must probably be happy to see his daughter showing interest in the sports area.

Milan’s father Mike used to take her for tennis training and watch her play. Even if being a celebrity kid, Milan did hard work and showed dedication towards her goals.

The beautiful Milan Tyson can play tennis all day, every day. She is a junior tennis player and has been training with Patrick Mouratoglou, coach of American tennis superstars Serena Williams and Coco Gauff.

The young girl has a great passion for sports. Since Milan’s dad is a renowned sportsman, she gets to meet her favorite tennis players such as Novak Djokovic and Serena Williams.

Mike Tyson and Serena Williams have a great bond because Tyson acted as her trainer, and she even hit the punching bag. So, it looks as though Serena is close to Milan as well. She has undoubtedly given her tips and tricks for tennis from her experiences.

Needless to say, the legendary boxer and tennis icon by her side, Milan could be one of the best tennis players lifting the Wimbledon trophy in the upcoming years.

So, in a nutshell, Milan’s dad, Mike Tyson, is very proud of her and loves her a lot. We can definitely say that Mike will support his daughter in every step of her career. And we wish Milan Tyson very good luck for her tennis career.

Going through Milan Tyson’s Instagram profile, she already has over 28.3k followers on Instagram. Not only that, but also her Instagram is a verified one. Mike Tyson’s daughter has leveled up her growth in the social media platforms as well.

She has inspired many people with her aggressive playing style in tennis. No wonder, she is going to have millions of fans and followers if her career rockets sky-high.

It’s no big deal for Milan to meet celebrities like Justin Bieber, Criss Angel, Migos, and Jack & Jack. Plus since Mike Tyson’s net worth approximates $3 million, she is also enjoying a comfortable life. The former heavyweight champion seems to be providing her with a splendid and happy life.

The name Milan is a common Slavic name, meaning ‘kind, loving, and gracious.’