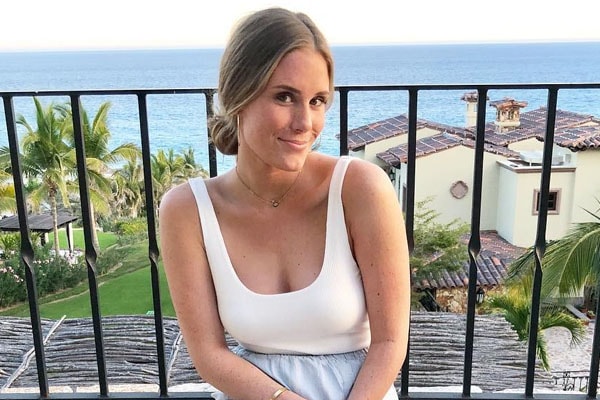 The American sportscaster, Joe Buck‘s daughter, Natalie Buck, is the eldest daughter with his ex-wife, Ann Archambault. She has a younger sister named Trudy Buck. Plus, she also has twin half-brothers- Wyatt Joseph and Blake Andrew. They are Joe’s twin children with wife, Michelle Beisner.

The Sports Emmy Awards winner, Joe Buck, walked down the aisle with her former wife, Ann Archambault, on January 23, 1993. However, after over two decades of being together, the former lovebirds decided to part their ways in the year 2011. Besides that, the Fox sports reporter tied the knot with the NFL Network and ESPN reporter, Michelle Beisner, on April 12, 2014.

Keeping all the things aside, let’s come back to the topic and stick up with the article until the end to know more about Joe Buck’s daughter, Natalie Buck.

Natalie Buck Has Starred In A Few T.V. Series

Joe Buck’s daughter, Natalie Buck, has starred in a few T.V. series such as Blue Bloods and Superstore. Although she has not gained a massive success as an actress, she is flourishing slowly to be better day by day. She probably has a promising salary that she gets from the T.V. series. Natalie’s dad is very proud of her that she chose a different path than him.

Ohhhh hi Natalie Buck on @BlueBloods_CBS so so so proud. My baby!! pic.twitter.com/SfZ8HxukyP

Besides that, she has also served as an intern at Fox 2 St. Louis. Furthermore, Natalie was at the news desk to give an editorial on fans running on the field at a Cardinals game. The baby daughter of famous Buck spends most of her free time with her father, who has guided her in the journalism and entertainment industry.

According to Joe Buck, Natalie admires her step-mother, Michelle, because of what she has been able to accomplish in the industry. However, Natalie is not obsessed with journalism but has the talent for it.

Natalie Is In A Loving Relationship With Her Boyfriend

Going through Natalie’s Instagram account, she is in love with her boyfriend, Bobby. She frequently posts photos of him with her on her social media. As for Bobby, he also has a private Instagram account. The cute couple looks very happy together. It seems like they just can’t resist without seeing each other.

Natalie and Bobby also go on romantic dates. Natalie’s dad, Joe Buck, is apparently happy to see her in a loving relationship. Perhaps, the love birds are taking their time before rushing into marriage. We might get to see them married pretty soon.

The eldest daughter of the famous sportscaster, Joe Buck, with former wife Ann Archambault, Natalie, loves her young siblings. Natalie Buck loves her younger siblings, Trudy Buck and half twin siblings, Wyatt Joseph and Blake Andrew, and enjoys spending time with them. Natalie does not hesitate to showcase her baby siblings on her social media.

As an elder sibling, she is always by her young siblings’ side. Joe Buck’s daughter has an immense love for her sister and twin half-siblings. The two Buck sisters are like best friends to each other. And she also loves spending time with Trudy. So, Natalie’s doing a great job as an older sibling to her siblings.

The name “Natalie” is a girl name derived from the Latin name “Natalia.” The meaning of the beautiful name is “Christmas Day.” The name form is in many languages, but especially in German, Dutch and English.