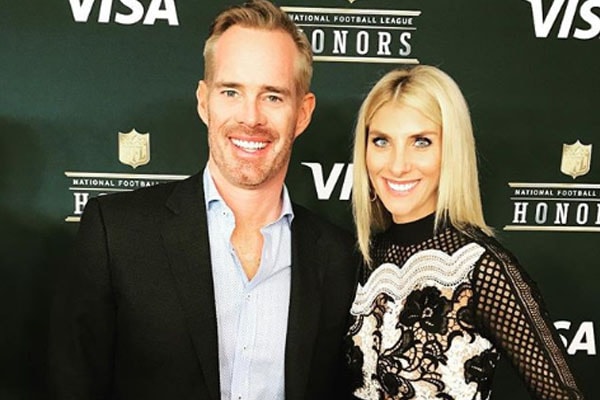 Michelle Beisner Buck, Joe Buck‘s wife, is an ESPN Feature Reporter who was born on October 15, 1976. Michelle and Joe tied the knot in April 2014 in Mexico after being engaged for seven months.

The gorgeous Michelle is a mother of twin baby boys Wyatt Joseph Buck and Blake Andrew Buck born on April 26, 2018. Before pursuing her career as a reporter, Michelle served as a cheerleader for Denver Broncos. Michelle has also got a nice bond with Trudy Buck and Natalie Buck, Joe Buck’s children from his previous relationship with ex-wife Ann Archambault-Buck.

Michelle Beisner Buck is one of the famous NFL hosts just like her partner Joe Buck. She is currently associated with sports television channel ESPN as a feature reporter. She is a host for the channel’s Monday Night Countdown and Monday Night Football.

Before ESPN, the beautiful Michelle worked as a host for NFL Network. She has also worked as a news presenter in NFL Network Now. Michelle served as a host and field reporter for the channel’s various programmes such as NFL Weekly Countdown, NFL Total Access, NFL GameDay Morning to name a few. She was also the host of pre-game show Total Access On Location at the Super Bowl.

The Espn reporter Michelle and her sweetheart Joe Buck first met during the Super Bowl XLVII in New Orleans in 2013. Well, the couple must have felt happy to have found each other who are from the same professional background.

Michelle Is A Happy Mother Of Two

Michelle’s twins are the reason who makes her one of the happiest people. Her twin boys Wyatt Joseph and Blake Andrew are indeed a blessing in her life and the source of happiness. Ever since the arrival of the little Bucks, Michelle and Joe are on cloud nine, and Michelle can’t stop sharing the adorable pictures of the cutest twins.

A post shared by MichelleBeisnerBuck (@michellebeisner) on May 8, 2018 at 5:09am PDT

Whether it’s at home with the babies or reporting out on the field, Mitchelle shows the same level of energy and enthusiasm. She is a great wife, mother, a professional and a great person as a whole.