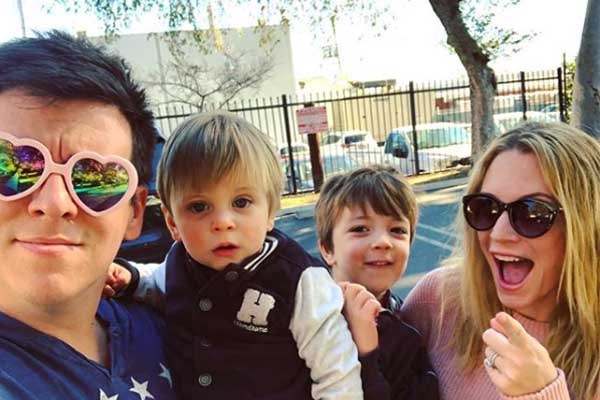 Philip DeFranco’s son Philip James “Trey” DeFranco III was born in 2014 before his parents exchanged their vows, whereas Carter William was born in 2017 after Lindsay and Philip were married. So, let’s get to know more about Philip’s two little toddlers.

We all know how cool Philip is on his video, but did you know he is equally cool in real life? He is a handsome man with a charming personality, says his wife, Lindsay. Well, Lindsay is a traveling blogger so, it’s her husband Philip who takes care of his two little men. According to mom Lindsay, her two little boys are quite close to their dad. They love spending time with him and enjoy his company. He feeds them, takes them to park, school, and also give his younger son potty training.

Furthermore, Philip shares such adorable pictures of his boys on his Instagram. He has been seen dressing up his boys like their favorite character, Batman. Whenever the family is out traveling, Philip is seen carrying his son Carter on his shoulders. His two boys share an equally lovely bond with mother Lindsay. Whenever she is home, she spends her time with her two boys and beloved better-half. She reads her boys some books and also gives them a big hug when going to bed.

Lindsay Jordan Doty’s sons share a special bond with one another. Whenever their parents are not around, elder brother Philip is seen taking care of his little brother Carter. The two brothers are like two sides of a coin totally different from one another but equally important to each other. The brothers can also be seen swimming with dad Philip sometimes or walking beside mother Lindsay. Like their mother, they also love traveling and horse riding.

In addition to that, both the brothers can be seen playing football at the backyard of their house and occasionally at the park. Elder brother Philip has also been featured in numerous videos with his father. The dynamic duo of father Philip and son Philip have shooted a lot of challenge videos and some quiz too.

A Heart Warming Message from Dad

As mentioned above, Philip is a rather cool and bold natured person, but deep down, he is a caring and sensitive dad. After he and his wife Lindsay welcomed their second son, Philip wrote a heart-touching letter to his infant son. He wanted to let little Carter know that despite being only less than 48 hours of meeting him, he meant a world to him. He further added that before his eldest son was born, his wife was the most important person in his life, but after meeting his son, his perception of life changed.

In addition to that, before his second son was born, his wife and eldest son were the most important people in his life, but that was soon to change. After his youngest son, Carter was born, Philip knew now his two sons and his lovely wife were the people that matter the most in his life.