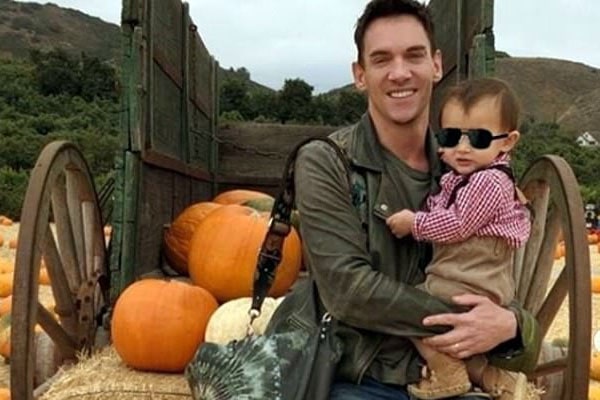 The famous entertainment personalities Mara Lane and Jonathan Rhys Meyers have been together as husband and wife since 2016. They are enjoying their blissful marital life with immense love and support for each other. On top of that, the presence of their son, Wolf Rhys Meyers, in their life has added more sweetness to Mara and Jonathan’s relationship.

So, how much do you know about Mara Lane and Jonathan Rhys Meyers’ son,  Wolf Rhys Meyers? If you are still unknown about him, then you are at the right place. Here, please get familiar with little Wolf and see how his celebrity parents are raising him.

Wolf Rhys Meyers is the firstborn of Jonathan Rhys Meyers with his beloved wife, Mara Lane. Together, the beautiful pair welcomed their son, Wolf Rhys, on 15 December 2016.

Reportedly, Mara gave birth to Wolf in their home, and a midwife did the delivery. He arrived just a few days after his mom, Mara Lane, announced through her Instagram that she and her husband, Jonathan, were expecting their first child together.

Wolf Rhys Meyers’ parents, Mara and Jonathan, have been together since January 2013. According to reports, the pair got engaged after a year of dating in December 2014. While the exact date the two tied their marital knot is still a question, it is known that they got married in 2016.

Jonathan Meyers and Mara Lane are happily married and feel blessed to have each other in their lives. Moreover, they feel more fortunate to have their son, Wolf Rhys Meyers, who gave them a new perspective on their life.

The Irish star Jonathan Rhys Meyers’ child, Wolf Rhys Meyers, often appears with his celebrity parents in public events. He gave his first red carpet appearance with his mom and dad at the age of one at the premiere of the film 12th Man in Fredrikstad, Norway. Ever since then, he frequently accompanies his parents at public ceremonies.

Furthermore, Wolf Rhys Meyers made his T.V. debut in an episode of Good Morning Britain in 2017 while his dad was there as a guest. He stole the show during his dad’s interview with Mel Gibson by walking around the studio. Wearing a suit jacket and a faux bowtie and vest, the then one-year-old Wolf brought a smile to everyone’s face as he shuffled around the set.

Besides appearing in public events with his parents, Wolf Rhys Meyers has also been in short films with his dad, Jonathan Rhys Meyers. Despite these brief appearances, Wolf’s dad does not want to encourage him to be an actor when he grows up. Instead, Jonathan wants his son to do whatever he chooses to do in the future.

Being born in a family of actors, Wolf Rhys Meyers indeed has some acting skills. However, it seems like the little man aspires to be in the sports field when he grows up as he is showing his athletic skills from such a young age.

Going through the Instagram page of Wolf’s mother, Mara, we can see several videos of Wolf involved in various sports activities. For example, the current four-year-old Wolf can often be seen mastering the skateboarding skills in parks around his place.

Moreover, Jonathan Rhys Meyers’ son also shows interest in learning the tricks and techniques of wave surfing. Apart from that, Jonathan and Mara’s energetic and soulful boy shows interest in other activities like dance, horse riding, snowboarding, and many more.

Wolf Rhys Meyers and his family suffered a devastating loss in 2017. On 7 September 2017, Wolf’s mom suffered a miscarriage, whom she and her husband had wanted to name Willow. Mara shared the news via an Instagram post and disclosed that they laid the unborn baby to rest. The Meyers family buried Wolf’s unborn sibling under a tree in their front yard.

Furthermore, Wolf Rhys Meyers’ mom, Mara Lane, thanked fans for the showering of love and support sent to her after she disclosed her miscarriage. Also, she shared a video clip of the ultrasound in which she found out about her miscarriage.

Though Jonathan and Mara can’t forget the loss of their second baby, we hope that seeing their first child, Wolf spreading love and happiness everywhere is lessening their pain.