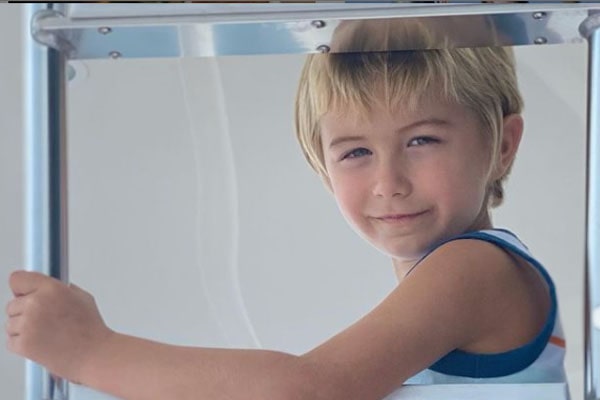 When one’s parents are celebrity personalities, it’s obvious that they also become the subject of excessive media scrutiny. The same is the case for Tatum Gretzky Johnson, whose father, Dustin Johnson, is a well-known golfer, and mother, Paulina Gretzky, is famous as an American model and a socialite.

With the rising fame of his parents, Tatum Johnson is also getting attention from the media people and the public. So, here, be familiar with Dustin Johnson and Paulina Gretzky‘s son, Tatum Johnson, and learn about how he is growing up.

Dustin Johnson’s son with Paulina Gretzky, Tatum Gretzky Johnson, was born on 19 January 2015 Monday, in Los Angeles, California. Tatum’s dad, Dustin, shared the happy news of his arrival with People magazine. He also revealed that both his baby mama, Paulina, and their newborn son, Tatum were healthy, resting comfortably, and in great spirits.

Moreover, the overwhelmed first-time dad, Dustin Johnson, talked about how his and his partner, Paulina Gretzky’s life changed after the birth of Tatum. He also said that the couple’s perspective on life totally changed from the first day of their son’s arrival.

Furthermore, Tatum’s mother, Paulina, had announced their pregnancy in September 2013. Similarly, while wishing her fans a happy holiday in December, she disclosed the sex of her unborn child via her Instagram page. However, Gretzky removed the post soon after.

Tatum Johnson Is The Older Brother Of River Jones Johnson

River and Tatum’s parents had notified their fans that they were expecting their second child in February 2017.

Soon after the birth of his brother, Tatum’s dad shared a family picture on his Instagram page. In the photo, Paulina held the newborn while Tatum Gretzky was lovingly kissing him.

It shows that Paulina Gretzky and Dustin Johnson’s son was thrilled with the arrival of his younger brother. Moreover, he still shares a great bond and loves spending quality time with his sibling.

Tatum Johnson is just a young kid at the moment, but he already possesses athletic skills. Of course, his athletic feat should not surprise anyone as his dad, Dustin is one of the greatest golf stars of all time. On the other hand, his mom, Paulina, is the daughter of one of the best hockey players, Wayne Gretzky.

Tatum’s parents and grandparents sometimes post videos of him whacking the ball around the yard. Seeing him practicing golf and hockey with his dad and granddad, it looks like Tatum also dreams of being a sportsperson when he grows up. But, currently, he is just a young boy, so we will have to wait for a while to see what he ends up pursuing as an adult.

Dustin Johnson’s son, Tatum also shows interest in other games like lawn tennis, baseball, and swimming, apart from golf and hockey. So, even though what field he will choose as his career is uncertain, Tatum is definitely an energetic boy, and his parents must be proud of him.

Tatum Gretzky Johnson’s mom and dad, Paulina and Dustin, are not yet tied in a marital knot. Though the romantic pair began dating several years ago, the detail on their wedding day is yet to come out. But, they have been engaged since August 2013. Tatum’s dad, Dustin, announced the news of their engagement to his followers through an Instagram post.

However, it looks like Tatum’s parents are planning to exchange wedding vows in 2021. We are saying so because, in April 2021, Paulina posted a series of videos and snaps on her Instagram featuring Vera Wang‘s wedding gowns. Later, in August, she revealed that she and Johnson would marry at Blackberry Farm, a five-star resort in Tennessee. However, Paulina hid the date for privacy.

So, the big day of Paulina Gretzky and Dustin Johnson is coming soon. The ceremony will undoubtedly be a grand one, and hopefully, the beautiful couple shares snippets of their big day with the fans.

Currently, Tatum and his family live in Palm Beach Gardens, Florida, and we hope he is enjoying his time with his parents and younger brother.