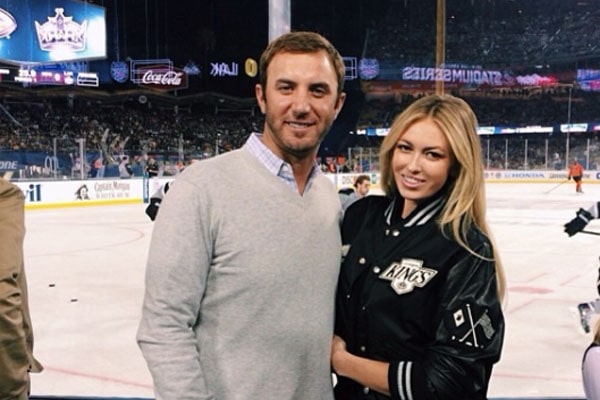 Paulina Gretzky and Dustin Johnson have been together as a couple for nearly a decade now. Despite being a member of the entertainment world where breakups and divorces are normal, this power couple proves that long-lasting relationships still exist in the business. Besides, their relationship also proves that if one has full support and understanding from their partner, they can easily find success.

It is because of their support and respect for each other’s profession that Gretzky and Johnson are finding success in their respective field and bagging millions of dollars from it. So, how much is the celebrity couple worth individually at the moment?

Here, let’s get familiar with Paulina Gretzky’s net worth and Dustin Johnson’s net worth, and find out who is richer.

Dustin Johnson’s Net Worth Is In Millions

The American professional golfer Dustin Johnson’s net worth is estimated to hover around $50 million. And, maximum credit of Johnson’s hefty bank balance goes to his years-long career as a skilled golf player.

So, how is Dustin Johnson’s career as a professional golfer helping him add millions to his net value? Find out below.

Johnson’s Income As A Pro-golfer

Dustin Johnson’s earnings as a golfer is gradually soaring high since he turned pro in 2007 and secured his first PGA Tour event in 2008. Though he was not fully committed to golf in his initial days, he eventually learned the value of hard work later. And, as a result of his dedication to his career, he began winning various tournaments along with pocketing thousands of dollars.

By the end of 2015, Dustin achieved the top 10 in the Official World Golf Ranking. In 2016, he won his first prime championship, and in 2017, he managed to rank himself as, number-one golfer worldwide. With that win, Johnson also earned a title in each of his first ten seasons, a feat previously achieved by Tiger Woods and Jack Nicklaus.

Excited to be back at Royal St. George’s Golf Club. Looking forward to tomorrow. pic.twitter.com/kjbNeERUmF

Furthermore, in the later years, Dustin Johnson has accomplished several victories in numerous tournaments, pocketing millions of dollars as cash prizes. In 2020, he won the FedEx Cup, the tour championship, and The Northern Trust, securing his position in the top spot on the world ranking.

Reportedly, Dustin Johnson has amassed more than $70 million in the golf tournaments as prize money. If we take into account the $15 million he received at the 2020 FedEx Cup title, Johnson is the third-highest earning golf star of all-time behind Tiger Woods, winning $120 million and Phil Mickelson winning $92 million. But even if we don’t count FedEx cup money as PGA Tour winnings, he is still the fifth highest-earning golfer in history.

Dustin Johnson’s net worth also includes the amount he obtains from his endorsements details with various high-profile companies. As mentioned on his official website, he has commanded endorsements with companies like TaylorMade Golf and Adidas, to which he has been loyal for a long time now.

The future son-in-law of the legendary hockey player, Wayne Gretzky, Dustin, recently signed a contract extension with TaylorMade. But, it is unclear how much Johnson’s contract with the company is worth.


Besides, Dustin Johnson’s sponsors are RBC, BodyArmor, NetJets, Perfect Practice, and Hublot. So, according to reports, Johnson makes an estimated $11 million each year from endorsements.

Apart from that, Dustin also rakes in a considerable amount of money as one of the partners of L.A. Golf. It is a brand that makes golf shafts and rose to fame after Bryson DeChambeau began using them.

In addition, there is also news swirling on the internet that Dustin Johnson is teaming up with Wayne Gretzky, Steve Nash, and billionaire Joe Tsai as one of the co-owners of the National Lacrosse League’s new franchise in Las Vegas.

Similarly, in 2016, Johnson sold an estate in North Palm Beach for $3.825 million. It featured a spa, wine cellar, and a swimming pool and boasted almost 4,500 sq. ft. of living space.

Again in 2017, Johnson and his fiance, Paulina Gretzky, acquired another property in Florida, paying $2.9 million. It was quite a good deal for the couple as the property was initially on sale with a price tag of $4.5 million in 2015.

Moreover, Dustin also had earned a large amount of money selling his Jupiter island property for around $5 million in 2014.

Also famous by the nickname DJ, Dustin Johnson is the founder of Dustin Johnson Foundation, which he founded in 2010. His foundation aims to support youth initiatives and promote and support college and youth golf programs. It hosts various golf championships yearly and utilizes all funds raised during the events to provide scholarships and equipment to needy youths.

How Much Is Paulina Gretzky’s Net Worth?

Dustin Johnson’s fiancee, Paulina Gretzky’s net worth might sound small compared to her man’s but, she is also a multi-millionaire. According to Celebrity Net Worth, Paulina’s net worth is roughly calculated to be $5 million. She raked in such a huge amount from her career in the entertainment industry as a model, singer, and actress.

Gretzky’s Earnings From The Entertainment Industry

Born in Los Angeles, California, on 19 December 1988, Paulina Gretzky set her sights on a career in modeling, singing, and acting since graduating from high school. And, with her complete dedication, she soon succeeded in achieving what she always wanted to be in her life. At present, Gretzky is a successful actress, model, and singer, who earns millions from different projects.

As a model, Paulina Gretzky has booked numerous jobs over the years and has been featured on the cover of different prestigious magazines, including Flare.

Similarly, as a singer, the Canadian-American beauty has released several reasonably successful tracks, including ‘Gathering Dusk.’ Some of them are also available on iTunes.

Outside of music and modeling, Gretzky also added a considerable amount of money as an actress. Some of the films Paulina appeared in include Grown Ups 2, Fame, Guns, Girls and Gambling, and Alpha Dog.

Hence, Dustin Johnson is comparatively wealthier than his soon-to-be wife, Paulina Gretzky. However, if we combine their net worth, they have $55 million to their name, which is solid enough for them to relish a luxurious life and give back to their community.

More On The Power Couple, Dustin Johnson and Paulina Gretzky