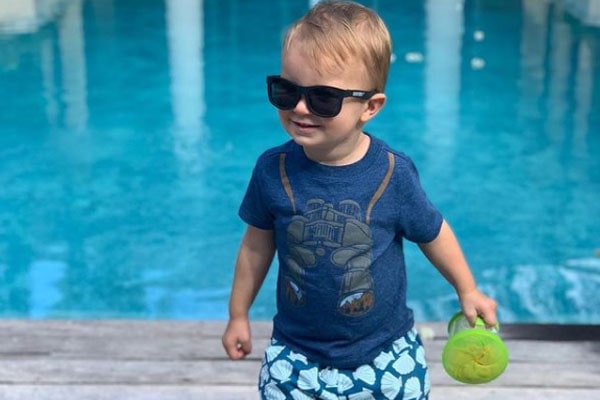 River Jones Johnson is just a little kid at the moment. But, he is already in the media spotlight as the American model and actress Paulina Gretzky‘s son. His father is Dustin Johnson, an American PGA TOUR golf star and socialite. Besides, River Jones is also famous among people as the grandson of one of the greatest ice hockey players, Wayne Gretzky.

River Jones Johnson arrived in this world on 12 June 2017, at Cedars-Sinai Medical Center, Los Angeles, as the second child of Paulina Gretzky and Dustin Johnson. Reportedly, River Jones’ mom, Paulina, announced her pregnancy in February 2017. She flaunted her baby bump in a now-deleted Instagram snap, in which she was seen resting her hand on her stretching bump.

After the announcement, River’s parents even revealed the sex of the unborn baby in an Instagram video which they deleted later. The short video clip captured on a beach showed the to-be-dad, Dustin, hitting a golf ball off the sand, which blew off, creating a cloud of blue dust. After that, Dustin said, ‘Another boy!’

Furthermore, after the arrival of River, his overwhelmed father, Dustin, even posted a family picture on his Instagram. In the photo Johnson’s wife, Paulina was holding the newborn while his eldest son, Tatum Johnson, kissed his baby brother.

Aforementioned, River has an elder brother, Tatum Gretzky Johnson, born on 19 January 2015 in Los Angeles, California. According to Dustin and Paulina, their life completely altered from the first day their first son came into their life.

Paulina Gretzky and Dustin Johnson’s son, River Jones Johnson, is growing up learning his father’s golf skills and grandpa’s ice hockey skills. But, among the two games, it looks like he is already taking after his granddad, who happens to be one of the legendary ice hockey players of all time.

Back in 2019, when River Jones was just two years old, his momma, Paulina, shared a clip on her Instagram showing him playing hockey with his grandfather. Even at such a young age, River was learning tricks from his grandpa with total concentration.

But River is just a kid now. There is still time for this youngest Johnson to decide if he really wants to be in sports or not when he grows up.

River Jones’ Parents Are Yet To Be Married

Though River Jones Johnson’s parents, Paulina Gretzky and Dustin Johnson, have been together for nearly a decade now, they are yet to tie the knot. According to sources, Dustin met the love of his life, Paulina, through her mother, Janet Gretzky, at the end of 2011. However, they did not date each other until 2012 as both were in relationships with another person.

Then, only seven months after Gretzky and Johnson began dating, they got engaged in August 2013. While most of their admirers are waiting for their wedding day, they have not revealed the date yet. But, Paulina has already disclosed through an Instagram story that she will walk down the aisle soon in the great state of Tennessee.

Hopefully, we will get the news of River’s mom and dad’s marriage shortly.

A gender-neutral name of English origin, River, means a stream of water that flows to the Sea.

However, there is a bizarre reason why Dustin and Paulina called their son River Jones. According to sources, Paulina chose the name River after the Riviera Course in L.A. It is the place where Dustin captured the Genesis Open in 2017 and, in the process, became World No.1. Similarly, she gave the second name Jones to her son after her mom’s surname and Dustin’s late grandma’s last name.