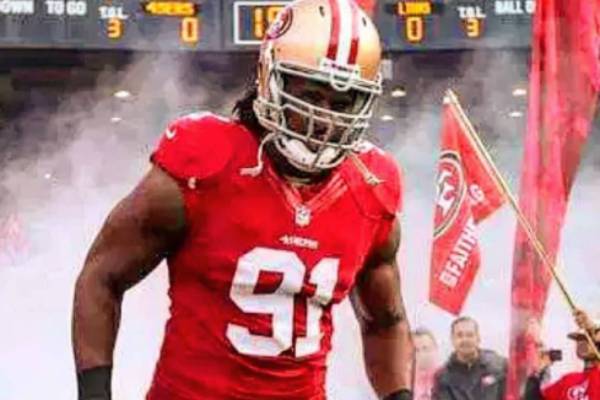 Raymondo Antoine McDonald is a former defensive end of the NFL’s San Francisco 49ers. The 49ers selected him in the 2007 NFL Draft. Furthermore, the athlete had a tremendous collegiate football career as a Florida Gators team member.

Unfortunately, even with a stellar career, the world mostly remembers Ray McDonald for his legal troubles. And owing to his legal problems, his ex-fiancee Kendra Scott and son have also been dragged into the limelight.

Despite this, little is known about his baby mama and kid. So, in this article, let us see how Ray McDonald’s son is growing up and what his baby mama is doing now.

Is A Father Of One

The first time the world heard about Ray McDonald’s child was when his then-fiancee accused the athlete of domestic violence. After that, the former couple has been careful not to let any information about their kid slip as the press dragged him into the spotlight in a terrible manner.

Consequently, little to no information regarding Ray McDonald’s son is known to the public. Furthermore, neither Ray nor his ex-fiancee is active on any social media platforms. As a result, tracking their son’s whereabouts is nearly impossible.

Moreover, the little one’s parents have gone to great lengths to keep his identity hidden. Despite this, Kendra constantly refers to him as Amari in a video. Unfortunately, there are no additional sources that can clarify whether or not his name is Amari.

Nonetheless, Kendra and Ray’s son must be living a peaceful life away from the unnecessary media drama. Thus, it is safe to presume that the world might have to wait for a while to learn about McDonald’s son or see him in the limelight.

Ray McDonald has been accused of many things throughout his life. Yet, the case that made the most uproar in the media has to be the one involving his ex-fiancee Kendra Scott.

The police arrested McDonald in May of 2015 on domestic violence and felony imprisonment charges. Following this, his former baby mama released a video of the former 49ers defensive lineman threatening her and their son.

However, this was not the first time Kendra accused the former footballer of assault. On August 31, 2014, Ray McDonald’s baby mama showed officials bruises on her arm and neck from an alleged altercation. The San Jose police department then issued a brief statement stating that she did have visible injuries.

The officials then took McDonald into custody on charges of domestic abuse. However, the Santa Clara County District Attorney did not file any charges.

The couple is now separated, and the last time the media heard from them was while the ex-pair was fighting for custody of their son. Well, let us hope that we won’t have to hear such cases regarding the athlete in the coming days.

It’s disheartening to watch talented athletes squander their talents on illegal activities. And it’s fair to state that our hearts are crushed when favorite athletes are suspected of doing anything illegal. Unfortunately, Ray McDonald, too, has faced numerous sexual assault charges throughout his life.

The police first visited the former player’s residence in response to a 911 call for domestic violence. Then again, the police arrested McDonald on suspicion of domestic violence on August 31, 2014. However, the victims of both cases chose not to file any charges against the player.

Yet, in December of 2014, officials arrested McDonald for the third time for sexual assault. Consequently, the grand jury formally charged the player with rape by intoxication on August 27, 2015. Still, the court later released him after paying a $100,000 bail.

The police later detained him once again on charges of domestic violence, child endangerment, and disobeying a court order. However, following this, he seems to have stayed away from the limelight.

After learning about the accusations against the former NFL player, do you think Ray and his son have a good bond?