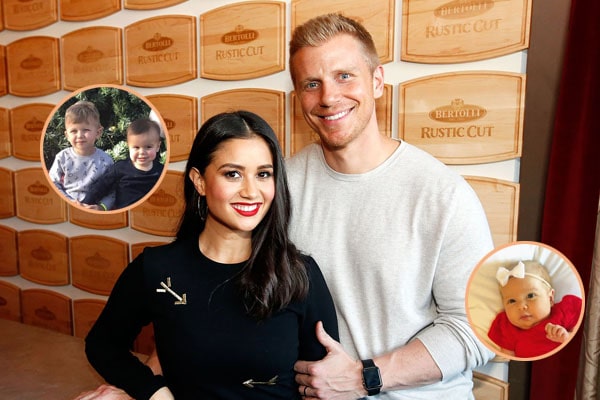 The handsome TV personality Sean Lowe is married to the beautiful lady Catherine Giudici, a graphic designer. The pair is also an on-screen couple who appeared on ABC’s show The Bachelor, which was running in its 17th season. After appearing on the same show together, they seem to have fallen in love with each other as they tied the knot on January 26, 2014. Well, Catherine did compete with 25 other contestants to get attention from Sean, and she did it. The adorable couple share three children together, sons Samuel Thomas Lowe and Isaiah Hendrix Lowe, and a daughter named Mia Mejia Lowe.

Also Read: Deryck Whibley’s Children, He Has Been Married Twice

Samuel Thomas Lowe, the first child of the lovely couple, Sean Lowe and Catherine Giudici was born in 2016. The arrival of Sean Lowe’s son Samuel was celebrated even before his birth in Palm Springs, California, by his parents. It looks like the three-year-old Samuel has not only inherited his father Sean Lowe’s blonde hair but his sophisticated sense of humor as well. We can see his fantastic laugh and cute snaps scattered all over his papa Sean and mama Catherine’s social media pages.

Furthermore, Samuel is the elder brother of two other siblings. He loves his siblings and plays with them most of the time. We hope he grows up to be a wonderful person, happy and successful.

Isaiah Hendrix Lowe is the second child of Lowe couple who was born in 2018. Before the birth of Sean Lowe’s son, Sean and his baby mama Catherine didn’t know the gender of the baby, while Sean had a gut feeling that a boy was to be born. And guess what, a boy did born. Since he’s just a year old, he has already become a big brother to younger sister Mia Meija Lowe.

Looking at the pictures shared by Isaiah’s papa Sean and mama Catherine on their Instagram, we can see that he is filled with love by his big brother Samuel and parents. We hope he grows up to be a healthy boy.

The reality stars, Sean Lowe and Catherine Giudici were blessed with a girl, Mia Mejia Lowe, in 2019. Mia’s father, Sean, always wanted a daddy’s little girl and was surreal to be blessed with a cute daughter.  And Sean Lowe’s daughter Mia Mejia is the adorable princess of her family, having her middle name named after mommy Catherine’s family name, and two big brothers who love her and are willing to protect as well.

Having such a handsome father and beautiful mother, we can assume that she will grow up to be a gorgeous girl. We wish little Mia to have good health and a dream to achieve.

Samuel Thomas Lowe: The name Samuel is of Hebrew origin, meaning “name of God” or “God heard.” And for the middle name, Thomas is of Aramaic origin, which means “twin.”

Isaiah Hendrix Lowe: The name Isaiah is of Hebrew origin, meaning “YAHWEH is salvation. And for the middle name Hendrix, it is of English origin, which means ‘Son Of Hendrick.’

Mia Mejia Lowe: The name Mia is of Scandinavian origin, meaning ‘Of The Sea Or Bitter.’ As for the middle name Mejia, it is of Spanish origin, a vernacular form of Latin, Greek Messias ‘Messiah.’