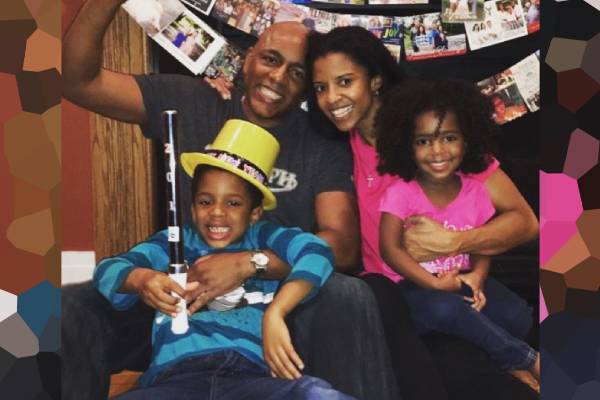 Fans of the Broadway musical play Hamilton will not fail to recognize the one who played the role of Angelica Schuyler. The character was played by none other than Renée Elise Goldsberry. She is a famous American actress and singer who won the Best Featured Actress in a Musical at the 2016 Tony Awards for her performance in the musical.

Goldsberry has also found success in the film and television industry. She has played in numerous movies and television series. Additionally, she has been cast for the role of Amelia in the upcoming MCU Disney+ series, She-Hulk: Attorney at Law, which will be premiering on August 17, 2022.

Aside from being a celebrity, the 51-year-old is a family person. She is a loving wife and a proud mother of her two adorable kids. Today, we will learn about Renée Elise Goldsberry’s children.

Son Benjamin Was Birth Was A Miracle

The actress tied the knot with her lawyer husband, Alexis Johnson, in 2002. After their marriage, the couple tried several times to welcome new members into their family. However, sadly, their efforts were in vain. Devastatingly, Renée had to lose four of her children in her belly.

After four miscarriages, Goldsberry was finally and miraculously able to give birth to a healthy baby boy, at the age of 38. The little bundle of joy, who is named Benjamin Johnson, arrived on May 5, 2009. Renée Elise Goldsberry’s son celebrated his birthday recently, which makes him 13 years old as of now.

Five years after the arrival of their first son, Renée and her spouse, Alexis, decided to welcome a new member into their family. In 2014, they adopted a lovely little girl from Africa named Brielle Johnson.

Born on February 12, 2013, Renée Elise Goldsberry’s baby girl was only about a year old when she was taken in by her and her husband. Brielle turned nine years old a day after Valentine’s day earlier this year.

Considering how young the kids are, it is understandable that Benjamin and Brielle do not yet have any social media accounts under their names. Nonetheless, as the title suggests, Renée Elise Goldsberry’s children often appear on her Instagram handle.

The 51-year-old actress usually posts adorable photos and videos about her little ones with appreciative and loving captions added to their description. Having to go through such gut-wrenching incidents, she mostly thanks God for sending these two lovely beings to her in her captions.

Additionally, Renée Elise Goldsberry’s little ones also frequently attend numerous events and shows with her. She even takes her kids on movie premieres, where they also get to meet other famous celebrities at such events and movie premieres. Some of the celebrities that the Johnson siblings have met include Shanice Williams, Lin-Manuel Miranda, and more.

Benjamin and Brielle must enjoy a comfortable life with their parents. With Renée’s fortune which she earned as an actress, there is a high possibility that they are living a comfortable life. Being the kids of a beloved celebrity, they must also receive much love from their mother’s fans. Nevertheless, we wish Renée Elise Goldsberry and her family a life full of happiness and prosperity.

Furthermore, as the kids are still too young to think about a career, it won’t be a surprise if they end up following in the footsteps of their parents.

Benjamin is a biblical name that comes from the Old Testament of the Bible and means “son of the right hand.”

Brielle is derived from the Hebrew name Gabrielle and means “heroine of God.”