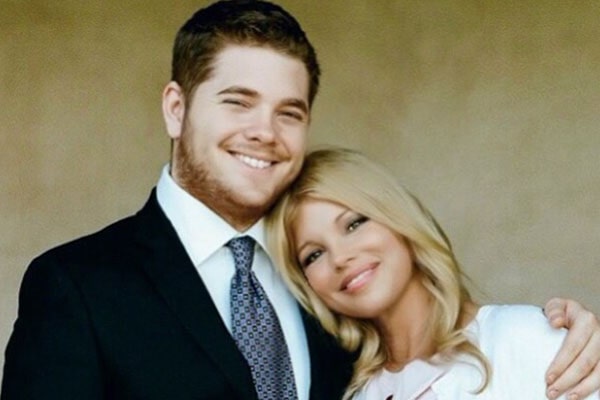 The evergreen beauty, Donna D’Errico, a model and actress, still looks like she is in her 20s despite crossing 50 years of her life counters. The gorgeous Donna has two children, son Rhyan D’Errico and daughter Frankie-Jean Sixx. She was previously married to Nikki Sixx and got separated after eleven years of marriage in 2007. Since then, she has been a single mother and supporting her two children to be their best versions.

Donna D’Errico’s son Rhyan D’Errico was born on April 1, 1993. He was born to the past relationship of Donna, whose details have not been revealed yet. Let’s get to know more about him.

An Author Of Music

Donna D’Errico’s son Rhyan D’Errico is a talented composer who has composed music for many documentaries and including the movie Happy Hunting, which was well received by nine critics. He has been working in the music department for a couple of years now.

Rhyan shows his passion for the rhythm and creates beautiful pieces. We hope to see him keep on creating greats beats and unravel the wonders of music.

Man Of The House

The information about Rhyan D’Errico’s biological father is still kept under wraps. However, the photo shared by Rhyan makes us shiver down to our spine on how the son Rhyan looks exactly like his father. From the eyes to smile, Rhyan resembles his father. From the caption so written, we can assume that Rhyan’s father is no longer in this world and is resting in a good place. We can see how Rhyan misses his father and cherishes the moments he shared with his late father.

Today would be my dad’s 60th birthday. I wish I had more time with you dad, but I cherish the memories I have with you. Love you. pic.twitter.com/MWBusF0yla

Then Rhyan D’Errico’s mother, Donna D’Errico, got married to Nikki Sixx in 1996 and got divorced in 2007 after spending eleven years together. In that period, Rhyan got support and love of a stepdad and a younger sister named Frankie-Jean Sixx.

We can see that Rhyan has a lovely time with his family. He is the man of the house with a gorgeous mother and sister. We hope they keep on kindling on making more memories together.

The name Rhyan is of Welsh origin, meaning “great queen, or goddess.”