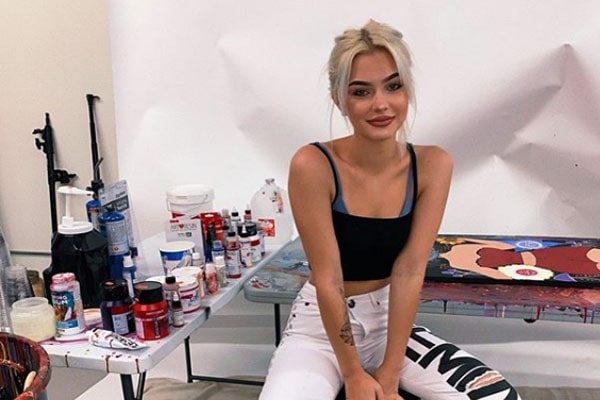 The American musician Nikki Sixx‘s daughter Frankie-Jean Sixx was born on January 2, 2001. She is the only child of Nikki, together with his ex-wife, Donna D’Errico. Nikki has three other children with his first wife, Brandi Brandt.

Frankie-Jean Sixx is Nikki Sixx’s youngest daughter among all of his four kids. She has three older half-siblings, Gunner Nicholas Sixx, Storm Brieanne Sixx, Decker Nilsson Sixx, and a younger half-sibling, Ruby Sixx. So, let’s come back to the topic and know more about Nikki Sixx’s daughter, Frankie-Jean.

All four children of the metal mogul Nikki have grown up, and they have pretty much sorted out their passion. The youngest Sixx, Frankie Sixx, is a makeup artist, and she loves it. All Sixx children are artists in different fields, and they are doing great. Even though they did not follow their father’s footsteps, they are creating their own identity.

Apart from makeup, Frankie is also involved in brand endorsements. She is a social media sensation with over 69.1k followers on her Instagram as of June 2020. We bet she has all the followers follow her because of the beautiful pictures she uploads of herself. Also, her makeup tutorials are a thing no girl can miss.

Similarly, she is fond of painting and has been drawing for as long as she can remember. As an artist, Frankie is probably earning satisfying money. She has her own website from when she sells her art prints, stickers, and custom works. Some of her arts with its prices are listed below:

Plus, she also has an Instagram account for her artworks only. So, she is clearly enjoying her passion and making the best out of it.

Frankie-Jean Was A Teen Mom

The beautiful Frankie became a teen mom back in 2016 when she was only fifteen years old. She had a baby boy named Jesse Evan Easterson with her boyfriend, Easton Easterson. But unfortunately, her baby passed away at birth on November 20, 2016, which must have been very heartbreaking to the couple and their family.

Although they could not hold onto their love and save him, the couple always makes his memorial and show how much he is loved even if he is not with them. Both Frankie and Easton have moved on from the tragic event they had to go through, but the grief must be deep within their hearts.

Nevertheless, the lovely couple still has the same love for each other. They are always there for each other. If you did not know Frankie’s boyfriend, Easton is an ice hockey player for El Paso Rhinos. Not only that but also he has a hobby to paint just like Frankie.

Frankie’s Mom Backed Her Daughter To Starr In Baywatch Reboot

While Donna D’Errico waited for her daughter during a dinner date at Craig’s in LA, the media asked her whether she would oppose if Frankie played her role in Baywatch. She replied saying,

When asked the same question to stunning Frankie, she said that she would maybe think about it. So, we could probably see Frankie replacing her mom in Baywatch-sequel.