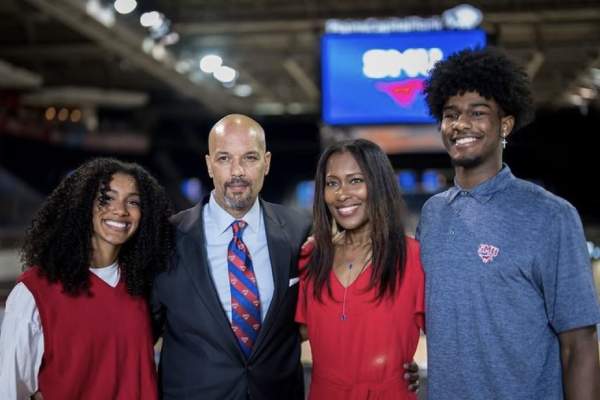 Robert A. Lanier, also known as Rob Lanier, is an American college basketball coach who serves the SMU Mustangs at Southern Methodist University. He was previously the head coach for the Georgia State Panthers and the Siena Saints men’s basketball teams.

In addition to being a successful basketball head coach, the 53-year-old is a family man. He is a devoted husband to his wife, Dayo Lanier, and a doting father to their kids. However, many might be curious to know what his little ones are doing now. Thus, we will learn more about Rob Lanier’s children in this article.

The head coach exchanged wedding vows with his spouse, Dayo Lanier, in early June 1998. Since then, the couple has welcomed two children. Dayo and Rob Lanier‘s firstborn, Emory Lanier, was born on June 9, 2001. Then, about two years later, on March 15, 2003, they had their second child, Kai Lanier.

Rob doesn’t shy away from publicly expressing how happy and proud he is of his little ones through his Twitter account. He frequently posts about his son and daughter with captions that make it evident that he loves and adores them. In addition, even his bio on his Twitter profile says, “Emory and Kai’s Father.”

Rob Lanier’s son, Emory, started playing the sport at the age of five. He was a member of the Boys Varsity Basketball Team at Woodward Academy, in College Park, Georgia. In addition, the 21-year-old also played for the Webb Spartan at Webb School of Knoxville and was selected all-state as a junior. Furthermore, he led the team to the state championship in 2019.

Following his high school graduation, Emory first joined the Davidson Wildcats at Davidson College in North Carolina. However, he transferred teams in June 2022 and will play for his dad as a guard of SMU Mustangs in the NCAA, representing Southern Methodist University.

The young player also posted a thank you message to his previous coaches and teammates on Twitter. He still has a bright future ahead, and we are looking forward to seeing him succeed at SMU. Also, talking about his love life, Emory Lanier’s girlfriend hasn’t been revealed yet.

Kai Is An Undergraduate Student

However, it doesn’t seem like Rob Lanier’s daughter is playing the sport at her college. She is currently an undergraduate student attending the University of North Carolina and will graduate in 2025. Kai has not revealed her major yet. Nonetheless, she is quite active on her social media handles. She has over 3.3K followers on her Instagram and over a hundred followers on her Twitter account.

Kai often posts pictures of herself on her Instagram. And, although she hasn’t made a post on her Twitter, she actively likes and retweets others’ tweets. Nonetheless, Rob Lanier’s children appear to be leading happy and healthy lives. Both are athletic and enrolled at colleges. We wish the Lanier siblings all the best in their future endeavors.

Although it is derived from many origins, in the US, “Kai” is often connected to its Hawaiian roots, which means “sea.”