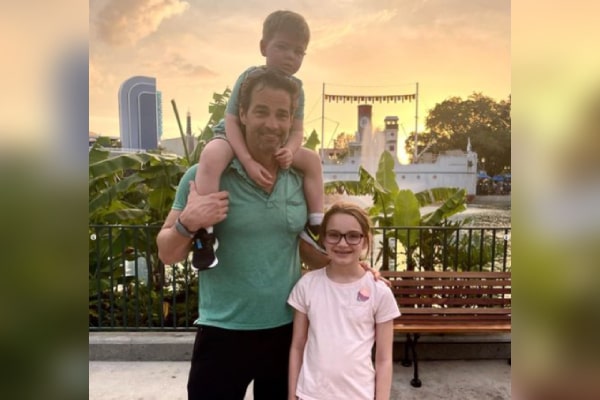 Rob Marciano is a proud dad of two whom he shares with his spouse, Eryn Marciano. Image Source: Rob Marciano Instagram.

Good Morning America meteorologist Robert Mark Marciano also goes by Rob Marciano, made a big name for himself with his job as a journalist and meteorologist. He gained wider recognition after working as a weather forecaster, substitute anchor, and occasional reporter for CNN.

Well, the Cornell graduate is a proud father to his kids, whom he shares with his wife of 11 years, Eryn Marciano, formerly Eryn Elizabeth Woodburn. The anchor shares many pictures of him spending time with his babies on social media. Hence, let’s get to know Rob Marciano’s children.

Rob and Eryn tied the knot on 27 November 2010. Just after a year, the duo welcomed their first baby, Madelynn Marciano. Rob Marciano’s daughter was welcomed in November 2011.

Moreover, Madelynn has one younger brother, Mason Anthony Marciano, who arrived on 12 June 2018. The journalist shared the good news along with many precious pictures via an IG post and also said that the youngest Marciano was born ahead of schedule, but both mother and son were in good health. As per Rob, his baby girl was thrilled to be a big sister finally.

Furthermore, the Marciano siblings’ mother filed a divorce from their father in June 2021. Even so, the lovely babies are spending time with both of their parents.

Mason Has Yellow Belt In Taekwondo

As of July 2022, Rob Marciano’s son, Mason, is four years old and has a bright smile. Sharing a cute picture, the famous personality congratulated him on passing his taekwondo test for a yellow belt last month. The little guy posed in his taekwondo robe with a yellow belt and a trophy in one hand. He looked delighted about his achievement.

Also, the meteorologist added in the caption that his boy loves taekwondo, and he loves all the lessons it teaches. We can also predict how much the little Mason loves it from his facial expressions. Moreover, the youngest Marciano goes to Chungs Taekwondo Studio.

Madelynn sang a song at her school’s solo concert with a sweet voice. She looked so angelic. Sharing a video clip of the eldest Marciano, Rob said he was bursting with pride and love for her. The sweet little girl seems to have exceeded the expectation of her dad.

Additionally, the eldest Marciano’s father even featured her on his IG feed on the occasion of International Women’s Day. The weather forecaster also expressed his excitement and said he can’t wait to see what a wonderful woman she would become in the coming days. Talking about her education, in September 2020, the reporter’s baby girl started her third grade. Thus, she must be focusing on her studies.

Wishing him a great time on father’s day, Madelynn made a card by herself and said Rob is the best dad and the #1 dad.

Spends A Lot Of Quality Time With Their Dad

In an interview with People, the Marciano siblings’ father mentioned that his focus will be on them. The journalist spends a lot of time together with his precious kids. At times, the Marciano brother-sister go on a picnic and visit the ocean and new places with their dad. Their father frequently shares updates on his social media pages.

Recently, Rob Marciano’s kids went on a spring break trip to Disney World with him and his estranged wife. He shared precious snaps of four of them enjoying the trip.

The Marciano family is picture perfect, professionally successful couple with two adorable kids. Even when going through Rob’s IG account, no one will think that he is in the process of divorcing his wife. Let’s hope their children will grow up spending time equally with both of them.

Nonetheless, Rob Marciano’s children are growing up surrounded by their parents’ love. In addition, they are spending a lot of quality time with their parents and appear to be the happiest kids. We wish the lovely brother-sister duo a healthy life and a successful career ahead.

The name Madelynn has Hebrew origin, and it means High Tower. Meanwhile, the English name Mason means Artisan who works in stone. Likewise, Anthony comes from the Roman family name Antonius which means Priceless one.