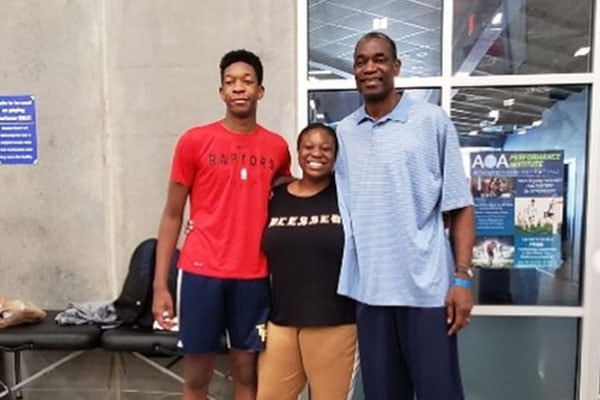 Dikembe Mutombo‘s son Ryan Mutombo is an adopted son of his father and mother, Rose Mutombo who was born in 2003. Ryan’s parents Dikembe and Rose Mutombo are a humanitarian who hail from the Democratic Republic of the Congo.

Dikembe and his wife have a daughter and a son named Carrie Biamba Mutumbo, and Jean Jacques Dikembe Mutumbo Mplombo, Jr. Including that Ryan’s father Dikembe is a former legendary NBA all-star player.

Ryan Mutombo Has Followed On His Father’s Footsteps

Just like his father Dikembe Mutombo, Ryan Mutombo has chosen sports life as his career. Everyone knows how outstanding NBA player Ryan’s father Dikembe was in his time but now the legend himself sends his son to fill in his shoes. Ryan is also an outstanding basketball player who plays for North Carolina in D.C.

However, Dikembe was not so pleased over his son’s decision to choose for UNC over Georgetown. Being the player of Georgetown himself, Dikembe wanted his son Ryan also to play for Georgetown. He even broke out his popular finger wag upon his 15-year-old son for saying he’d like to play college basketball for the UNC.

According to TMZ Sports, Ryan’s father seemed to dislike the situation but is positive that he could recruit Ryan over in 3 years of time. But this doesn’t make Dikembe not to love his son more.

The young rebel player Ryan is also active on his social media including  Twitter; an Instagram account where he posts all his basketball-related contents over his 5K followers.

Ryan Mutombo Has Made His Father Proud

Dikembe Mutombo’s son Ryan Mutombo had made his father proud recently by winning the basketball championship that took place in Atlanta, GA.

The young already 6’9” central player, Ryan helped his squad Team Forrest to win the 16U finals scoring 74-61, making his father proud with 22 points. Well, we can expect that from Ryan and Dikembe too must be giving his son special lessons and tricks for the game.

Ryan is an English name of Irish origin which gives the meaning of “little king” or “illustrious.”