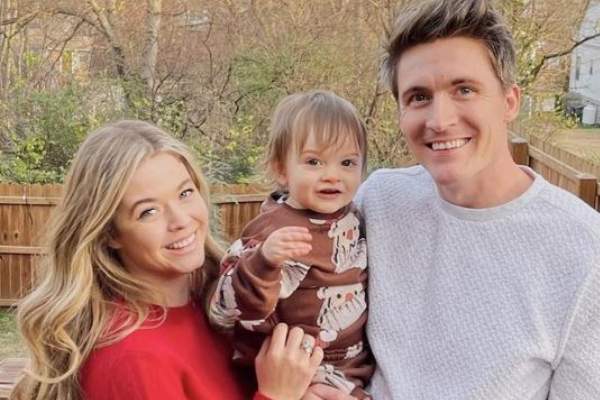 Pretty Little Liars took off on June 8, 2010, with ten episodes. The rating success of those episodes prompted the series to be extended to the following six seasons consisting of more than ten episodes. Because of its buzz, actors who gave life to their characters also came into the limelight. One of them is Sasha Pieterse, portraying Alison DiLaurentis.

While Sasha had tumultuous relationships and went through failed marriages in the series, her real-life personal life is the polar opposite of that of her character. She is happily married to her long-time partner, Hudson Sheaffer, and the couple is proud parents of a child. So, today’s article is about Sasha Pieterse’s son, Hendrix Wade Sheaffer, and see how he is growing up.

Sasha and Hudson exchanged their vows on May 27, 2018, three years after getting engaged in December 2015. The couple had known each other for a long time and shares an adorable bond. After tying the knot, the lovebirds decided to further extend their family of two.

In May 2020, on the occasion of their second wedding anniversary, the actress shared a black-and-white photo of Sheaffer kissing her baby bump. Announcing their pregnancy, Hudson Sheaffer wrote alongside that they were beyond excited to share their sweet news with all. Sasha further added that the couple was due to welcome their precious kid in October.

The actress and her husband thought their anniversary to be the best way to share their joy as it is the day their lives changed forever. She also wrote about how motherhood is her favorite role and even thanked her hubby for being her safe place and rock. She concluded her heartfelt caption by wishing her beau an anniversary. Likewise, Sasha Pieterse’s husband also shared the happy news by posting a picture of her embracing the pregnant belly.

After revealing their pregnancy, the Pieterse-Sheaffer couple often expressed excitement about their baby’s arrival. The actress used to post several pictures of her embracing and enjoying her pregnancy.

On November 6, 2020, Sasha Pieterse’s son, Hendrix Wade Sheaffer, was born. He arrived after 27 hours of labor and weighed 7lbs 4oz at that time. Furthermore, his mom and dad shared a picture of him to announce his birth.

Hendrix Wade Sheaffer’s mom wrote down that their lives had changed forever one week ago, and they were absolutely in love with him. Likewise, his dad also shared the same picture with a simple yet lovely caption that read “This little human,” along with a heart emoji.

The new parents were excited to enter into the phase of parenthood, and they have done an extremely good job so far.

Ever since his arrival, Hendrix Wade Sheaffer’s parents have featured adorable pictures of him on their social media. We can see through those posts that he is having extremely good times growing up.

Not only has he been featured on the actress and her husband’s Instagram, but Sasha Pieterse’s son also has a separate IG account. The little guy is already a social media star, with 11.6K followers on IG. It must be run by his parents, who posted adorable photos on his profile as a part of memories.

For now, Sasha’s baby boy seems to be growing up surrounded by immense love and care. His dad and mom must be fulfilling his needs without any worries. Likewise, they even spectacularly celebrated his second birthday in November 2022. Growing up with two extremely talented parents, only time will tell if Hendrix will follow in their footsteps.

Nonetheless, let’s hope that Sasha Pieterse’s child will have a beautiful future. Hopefully, he will become a successful personality like his parents.

Originally used as a surname, the name Hendrix stemmed from the same roots as the name Henry, i.e., old Germanic Heimirich, and it means “ruler of the home.” On the other hand, a masculine name, Wade has an Anglo-Saxon English origin and derives from an Old English verb “wadan,” which means “to go.”