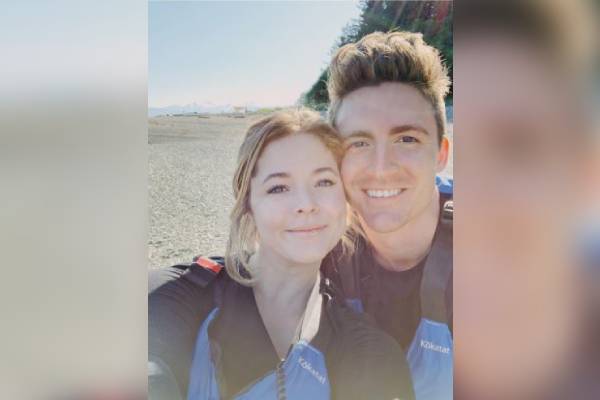 Alison DiLaurentis of Pretty Little Liars had tumultuous relationships with her on-screen partners. She was married to Elliot Rollins (played by Huw Collins) and then dated several other guys. Alison and Emily Fields (played by Shay Mitchell) were engaged in the finale. They got married but unfortunately divorced.

In addition, you must be wondering who portrayed Alison in the PLL. Well, Sasha Pieterse is the one who brought Alison to life. While she had a complicated relationship in the show, the same definitely cannot be said for her real-life relationship. The PLL actress is happily married and lives a content life with her hubby Hudson Sheaffer.

So, here we present you this article about Sasha Pieterse’s husband and more insight into their marital life.

Sasha and Hudson are one of the perfect pairs that have lasted for a long time now. The couple has been together for many years. Unfortunately, there is no concrete answer to how the duo met. But given that the lovebirds seem adorable together, they must have had the cutest meet-cute ever.

Having worked in the entertainment industry, could the pair have met through a workshop or class? Although the exact timeline of their relationship remains a mystery, as per their Instagram posts, the duo has been posting about one another since the early 2010s. So, could it be Hudson and Sasha have been together since her time in PLL?

Well, no matter how many years it has been, the duo seems to be going strong, and now let’s know how their courtship turned into a lifelong union.

As mentioned earlier, it has been many years since Sasha and Hudson started their relationship. In December 2015, the couple got engaged. But, the duo never rushed for their wedding.

Sasha and Hudson remained engaged for the next three years. Then, in May 2018, the lovebirds exchanged their wedding vows. Their nuptial was held at the Leslie Estate, a castle in Glaslough, Ireland. Talking about their beautiful ceremony, the newlyweds revealed that they had the most magical day in Ireland, and their big day was beyond their wildest dreams.

Hudson Sheaffer’s bride wore a custom Christian Siriano gown, Zadig and Voltaire bracelets, and XIV Karats necklace. On the other hand, Sasha Pieterse’s husband donned a black tuxedo. Nevertheless, it must have been a lovely ceremony.

Ever since their marriage, the duo has been together in every phase. Hudson often shares about Sasha’s achievements on his social media. In addition, when she was diagnosed with polycystic ovarian syndrome or PCOS, she revealed how he helped her through the tough disorder in every step of the way.

It has been almost a half decade since the lovebirds shared their wedding vows. The couple has welcomed a child together in all these years of being husband and wife.

In May 2020, Hudson Sheaffer’s wife announced her pregnancy on the occasion of their second wedding anniversary. She took to her Instagram and shared a beautiful snapshot of herself flaunting her baby bump while he kissed her. She further revealed that the baby was due in October.

Additionally, the actress thanked her spouse for being her rock and safe place. Similarly, Sasha Pieterse’s hubby also shared a post for her and showed his love.

Finally, on November 6, 2020, Sasha Pieterse’s son, Hendrix Wade Sheaffer, was born. She gave birth to him after 27 long hours of labor, and the baby weighed 7lbs 14oz. The new parents shared the news of their baby boy’s arrival on their respective social media.

Both husband and wife often share aesthetic pictures with their kid and it seems the family of three is having fun.

As mentioned earlier, the Pieterse-Sheaffer couple is engaged in the entertainment industry. While Sasha mainly worked on several movies and series, Hudson, on the other hand, has only two acting credits to his name. He has even served on The Dahlia Knights as a stunt performer.

Additionally, Sasha Pieterse’s husband is an author. He released his cocktail book, Comics & Tonics, in 2020. The book adds a fun and illustrated flair to dinner-and-drinks routines.

Going through his Instagram, we can see that Mr. Sheaffer loves traveling and adventure, and the couple often travels to various locations. For instance, in 2019, he shared a picture of him swimming in a glacier in Alaska. Likewise, the couple even took wedding shots on the Cliffs of Moher.

Moreover, Sasha’s hubby has also been involved in several charities, including Habitat for Humanity in New Orleans, and even went on a mission trip to Mexico. The duo is supportive of one another’s careers.

No matter how many years it has been, Sasha and Hudson’s marriage has grown more robust. Hopefully, the couple will continue living a content life together. We wish them more success and happiness in the coming days.