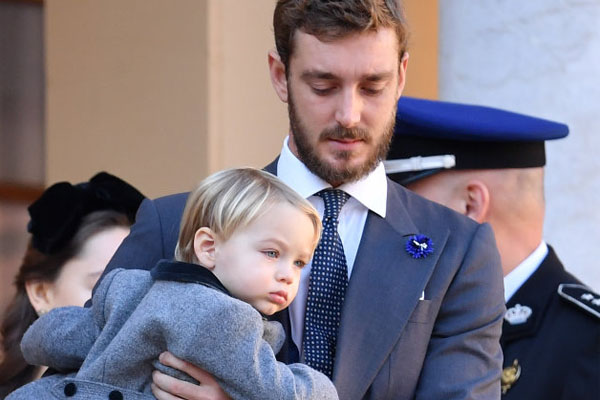 The couple walked down the aisle in a civil ceremony on 25 July 2015 in the gardens of Prince’s Palace of Monaco. The royal family of four lives blissfully and share a strong and intimate bond.

The Most Beautiful Royal Baby

The two years old, Pierre Casiraghi and Beatrice Borromeo’s baby boy, Stefano is the little royal of Monaca successful to make the Windsor tremble. Furthermore, the first child of the beautiful couple is one of the most beautiful royal babies, in fact, competing with George of England and his brothers. The fans and media admire and adore the extraordinary beauty of the little royal prince. Besides that, the adorable little blonde with crystal clear eyes is the elder brother of the newborn Francesco Carlo Albert Casiraghi.

The adorable young Stefano inherits his name from his grandfather, the late Stefano Casiraghi, who died in the year 1990. However, it is undeniable that the young boy got his looks from his parents, Pierre and Beatrice who is the former model of Trentino. Brother of the newborn Francesco, Baby Stefano was the most awaited guest of the autumn National Day and drove everyone crazy with his good looks.

The blue-eyed blonde has a beauty so incredible that the lovely young boy has been called the little blue prince. However, the young Casiraghi is the not the only child and is the brother to adorable Francesco Carlo Albert Casiraghi. Prince Stefano’s younger brother, Francesco, was born on 21 May 2018 and is the tenth in the line to the throne. Despite the short gap between the siblings, Stefano is a caring brother to brother Francesco. The sibling shares a strong and intimate relationship.

The name Stefano is a unique name for a baby boy. The origin of the name is from the Latin word Stephanus, which is from the Greek word “Stephanos”. The name is derived from the word Stephanos which means “a crown” or “a garland”. The name is borne by the first Christian martyr and one of the seven to assist the apostles.