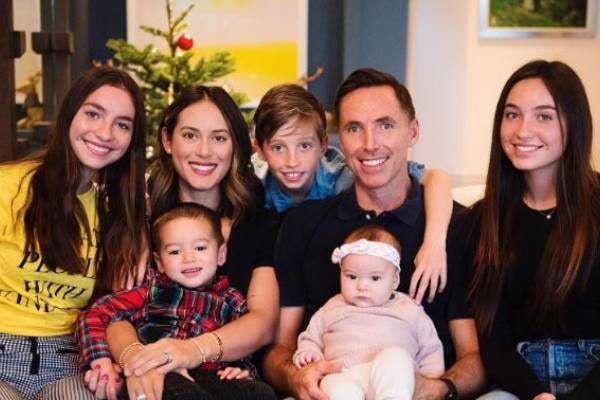 Steve Nash is a Johannesburg-born Canadian basketball coach. He currently serves as the head coach of the Brooklyn Nets of the National Basketball Association. Nash is a former player who played with different teams in his 18 seasons long professional playing career. He has made a good name for himself in the basketball world.

The successful basketball head coach is a doting father of five children. The kids are growing up with immense love and pampering from him. Did you know Steve Nash’s children are from two baby mamas? If not, then take a look at the article about his kids and see how they are growing up.

Steve Has Three Children With His First Wife

Steve Nash met Alejandra Amarilla in 2001 in Manhattan. At that time, he was a point guard at Dallas Mavericks. Shortly after, they began dating, and in 2005, the couple exchanged vows. The duo remained married until 2010 and parted ways.

In almost a decade of being together with Alejandra, the NBA coach welcomed three children with her. So, where are his kids with his first wife? Let’s find out further.

Although Steve and his former wife had tied the knot in 2005, they had already started their family. In October 2004, Steve Nash’s daughters, Lola Nash and Bella Nash, were born.

Lola and Bella’s parents kept them away from the limelight while they were growing up. As of now, the twin sisters must be ending their high school. The exact information regarding what they are doing now has not been revealed yet.

Furthermore, Steve Nash’s daughter, Lola, seems to be a person of secrecy. She has kept her Instagram private and has not revealed much information about her personal life.

On the other hand, Steve Nash’s babygirl, Bella, is not as private as her sister. She is currently dating Julien de Bréchard. It is not known when the smitten pair met and started dating. But in February 2022, she made her relationship public through an Instagram post.

Nevertheless, Bella and Lola must have had a great time growing up. They have not revealed their career plans, but let’s hope they will soon. They are also elder sisters to the other three siblings.

As mentioned earlier, Steve and Alejandra welcomed three children in almost a decade of togetherness. After their daughters’ birth, the couple must have waited a few years before planning for the third child.

In November 2010, Steve Nash’s son, Matteo Joel Nash, was born. He announced the baby’s birth through a statement to Life & Style. But, Matteo Nash‘s dad called it a “bittersweet moment.”

Nash then revealed the divorce process that he and his estranged wife were going through. Similarly, the head coach shared they had been living separately for the past few months. The divorce was finalized after a few years.

Steve’s son must be still in school. He still has a lot of time to figure out his career plans. Who knows, he might follow in his dad’s footsteps and become a successful basketball player.

After his first marriage ended, it must have been hard for Matteo, Lola, and Bella’s dad. But soon enough, he was able to move on after he met his soulmate.

In August 2015, Nash met Lilla Frederick, and shortly after, they began dating. In November 2015, the couple made their relationship public, and the following year, the NBA coach proposed to Lilla. Then, a year later, in September 2016, Steve got married to his fiancee.

Their marriage is still going strong, and they have welcomed two children. Steve and Lilla’s first child is their son, Luca Sun Nash, who was born in July 2017. They immediately shared the news of the little guy’s arrival on social media. Similarly, Nash’s kids, Lola, Bella, and Matteo, must have been ecstatic to have a new baby brother.

Then, in June 2019, Steve Nash’s youngest child, Ruby Jean Nash was born. As the youngest member of the Nash family, she must have been pampered really well by her parents and siblings.

Steve Nash’s children seem to have a great relationship with each other. They often spend quality time together on several occasions and events. Nevertheless, let’s hope the kids grow up and become successful in their careers.