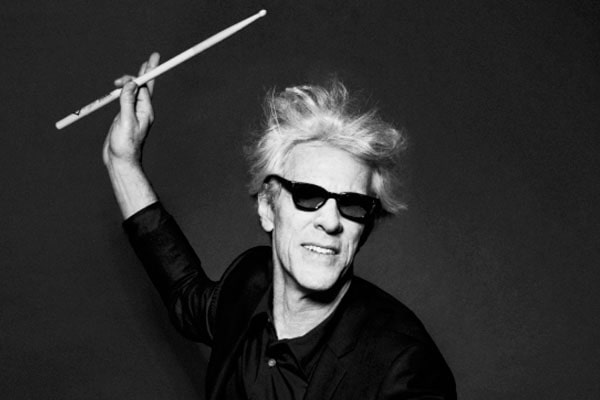 Stewart Copeland is the lead drummer and the leader of the British rock band The Police. He is also father of eight children. Image Source: Getty Images.

The former band member of The Police, Stewart Copeland is an American musician as well as a composer. We all are familiar with his music career but today let’s get to know about Stewart Copeland’s children.

Stewart Copeland and his first wife Sonja tied their knot back on 16 July 1982, but unfortunately, their relationship didn’t last long, and they separated in 1991. They had two children together, Jordan and Scott.

Stewart Copeland’s son Jordan Copeland is a director and editor. Unlike his father, he is more into making movies. He has directed and edited numerous short movies and documentaries. In fact, he got the opportunity to direct his father’s reunion documentary the Better Than Therapy. Jordan has also been associated with many famous companies such as BBC, CNN, National Geographic, and many more.

Furthermore, Stewart Copeland’s son Jordan is a married man. He tied his knot with his beloved wife, Ami Copeland, back in 2008. His wedding was rather amusing as the weather was really challenging, but his father Stewart was present to assist him on his milestone. Besides, Jordan Copeland’s wife, Ami Copeland, worked for a Channel 4 website called Bite.

After Stewart’s unfortunate divorce with his first wife, he found love once again in the form of Fiona. Stewart Copeland and Fiona Dent exchanged their vows in 1993 and have three lovely kids. They are going strong with their relationship, and now she is accompanying him with his upcoming projects. Both the duo share a lovely relationship with their daughters Eve, Dylan, and Celeste Copeland.

Furthermore, Stewart and his daughters together are often seen on different occasions, mainly in his concerts. His daughters were seen posing for a photo with him on the backstage of Ben-Hur: A Tale Of The Christ. The picture they took was amazing, and the father-daughter chemistry can be seen clearly in the photo.

So, we can assume he is quite close to his kids, and his kids are also really close to him. Nonetheless, his daughters also share a lovely bond with their brothers Jordan, Scott, and Sven.

Stewart Copeland’s daughter, Eve Copeland’s name, is of Hebrew origin, meaning living, and Dylan Copeland’s name is derived from Welsh meaning son of the sea, son of the wave, or born from the ocean. Similarly, Stewart’s third daughter Celeste Copeland, her name is of Latin origin meaning heavenly or celestial.

Besides his two sons with his previous wife Sonja, Stewart also adopted Sven. He is the son of Sonja from her previous relationship. Stewart also has a son named Patrick with his relationship with Marina. Stewart Copeland’s son Patrick Copeland is a mathematician, and he is most likely a teacher. He has also been seen with his father during the concert’s after-party.

Moreover, Stewart also has another son named Henry Copeland, according to Getty Images. It was a picture taken during the mid-’80s at a concert.

At last, Stewart cares for all his eight children which proves that he is a great father. Despite the busy schedules, he makes time for them. He has been seen with his children on many occasions, sharing a lovely moment and making memories with them.