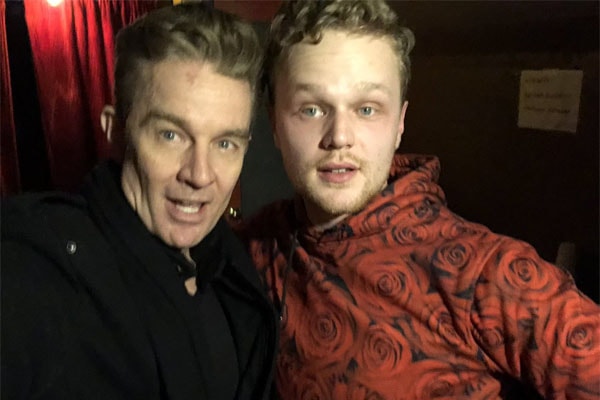 James Marsters‘ son Sullivan Marsters was born on the 10th of May 1996 in Los Angeles, CA. James had Sullivan together with his ex-wife Liane Davidson. Sullivan’s parents, James, and Liane tied their wedding knot back in 1989. Unfortunately, the former couple got divorced in 1997 after 8 years of their marriage.

Sullivan is the only son of his parents and has no siblings as of 2019. Sullivan’s father James is currently married to Jasmin Marsters. Now let us glance at the profile of actor James Marsters’ son Sullivan.

Sullivan Marsters Is A Versatile Singer, Songwriter, And Guitar Player From LA

Sullivan Marsters is a versatile artist from L.A. to the Bay, CA. He is a versatile singer and guitar player and a member of Ghost of the Robot, Radiohelmet, and Power Animal. His passion includes music composition, performance, recording, and production. Sullivan also writes songs of his own.

Besides, being a member of his band, Sullivan also runs a YouTube channel titled by his very own name. He posts his life-content blogs and also releases songs made on his own.

Furthermore, Sullivan also has a Twitter account. Going through his Twitter handle, it seems quite obvious that the singer lives his life to the fullest taking vacations to lovely locations.

He currently resides in Berkeley, CA and one of his newly released single is titled 4th of July.

Sullivan Is The Only Child Of Famous Actor James Marsters

As mentioned earlier, Sullivan is the only child and son of the Angel star James Marsters. The father and son are seen doing various live shows and concerts together. The duo has also done multiple songs and videos together including Vandals.

Looks like there is a very strong bond between Sullivan and his father. And we can clearly see the happiness when they are together.

Sullivan is a male given name of Irish origin meaning  “black-eyed one.”