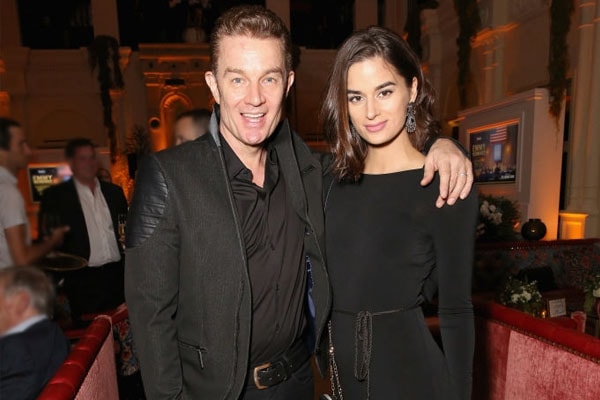 James Marsters‘ wife Patricia Rahman aka Jasmin Marsters was born on the 18th of April 1986 in Germany. James and Jasmin tied their wedding knot back on the 14th of January 2011. The adorable couple is together ever since.

However, this was the second marriage of the famous American actor James Marsters. James was previously married to Liane Davidson. The former couple got married in 1989 and got divorced in 1997 after 8 years of marriage. The exes share a child together named Sullivan Marsters.

Patricia aka Jasmin Is An Actress, Singer-Songwriter And Artist Living In LA

Jasmin Marsters born as Patricia Jasmin Rahman on 18 April 1986 is an actress, singer, and artist. She currently resides with her loving husband James in Los Angeles, CA. The actress is best known for her roles in movies including Velvet Buzzsaw, G.R.E.T.A., and Vidiots.

James Marsters’ wife Jasmin likes to explore diverse characters. In 2012 alone, she played the character of a cold professional hit-woman, a charm you out of your socks doctor, and a kick-ass lesbian. The versatile actress tries to adapt to the life of every character she plays on the screen.

The 5 feet 6 inches tall artist was born and raised in Germany. Patricia was a student of fashion design from Trier, Germany. However, she followed her heart and left her fashion designer career behind as she pursued as an actress.

James Marsters Is A Longtime Boyfriend Of Jasmin

Patricia Rahman Marsters, 25 at the time married the former Buffy the Vampire Slayer actor, 48 at the time, in a private L.A. civil ceremony on Jan. 14, 2011. James was a longtime boyfriend of hers. The lovely couple dated for almost six years before getting married.

Jasmin’s husband recalled his first meeting with her to PEOPLE in 2006,

“I met her backstage and got her phone number, but then my jeans were cleaned out by the crew and they threw it out. I’d given her my number, but she took down one digit wrong. It took her six months to call all of the different combinations.”

The talented actor James has appeared on many TV shows involving special powers. It is quite beautiful to see the former Angel star now discovering a real-life power of his own – love, as he got married to the love of his life. The two love birds are together ever since and live in LA, California.