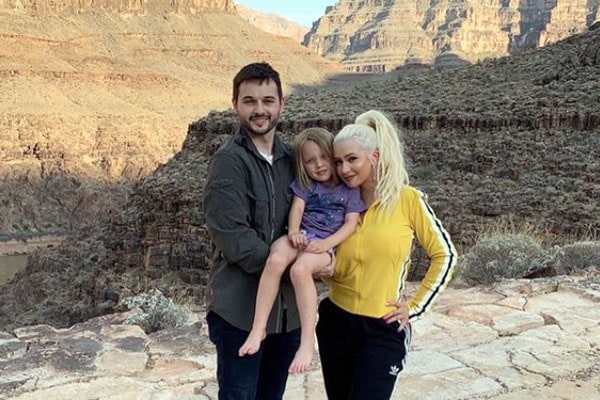 Christina Aguilera is an award-winning American pop singer and television personality. One of the most influential people worldwide, Aguilera’s accolades include a star on the Hollywood Walk of Fame, five Grammy Awards, and one Latin Grammy Award. Moreover, the 40-years old beauty Christina is also one of the best-selling music artists globally, who has sold 100 million records to date. In addition, as an actress, she has appeared in several American films, including Zoe, The Emoji Movie, and Burlesque.

The American singing diva Christina Aguilera was once in a marital relationship with the marketing executive Jordan Bratman from 2005 to 2011. After separating from Bratman, Aguilera moved on with her then-boyfriend and current fiance, Matthew Rutler. Together the romantic pair, Aguilera, and Rutler have a daughter, Summer Rain Rutler.

Christina Aguilera got engaged with film producer and musician Matthew Rutler in 2014, after being in a romantic relationship for four years. Soon after their engagement, the news of Aguilera’s pregnancy circulated in the news headlines. Aguilera even did a nude maternity photoshoot for V magazine, with her baby bump, few months after their engagement. However, she had revealed the gender of the baby a month before the photo shoot.

The 2013 People’s Voice Award winner, Christina Aguilera, and her partner, Matthew Rutler’s waiting finally got over when their daughter Summer Rain Rutler arrived on 16 August 2014 in Los Angeles. Two days after the birth of their baby girl, the singer expressed her happiness via a Tweet. She also revealed her newborn’s name through the same post.

Later, in an interview with the People magazine, Christina revealed the reason behind giving the name ‘Summer’ to her daughter. She said to the reporter that she had initially thought of giving her baby girl a traditional name. However, after the birth of Summer, Aguilera changed her mind and decided to give her a usual name. Moreover, Christina stated that just like summer brings warmth and light, and rain brings new life, her daughter also reflects the same spirit.

Moreover, Christina Aguilera’s kid, Summer Rain Rutler’s first baby snap, was released to the media when she was only five months old. In the picture, the adorable little girl was wearing a cloth diaper with the phrase ‘Lil Diva’ written on it.

Christina Aguilera’s daughter, Summer Rain Ruftler, turned seven this year, and she is already showing signs of being a rockstar like her celebrity mom. Her mom occasionally shares videos of her singing and pleasing her parents with her melodious voice.

Last year, on mother’s day. Christina Aguilera shared a preview of her ‘diva in the making’ daughter, Summer Rain singing, in her takeover of Billboard’s Instagram Stories. While spending some of her quality time on Billboard’s account, Aguilera gave a glimpse of her home life, including her little girl. Along with it, she quipped on a clip of Summer’s high-pitched vocals revealing that her girl had been practicing her high notes during quarantine.

Besides being passionate about singing, Summer Rain also shows interest in art and crafts works. On her sixth birthday, after returning from the campsite, Summer recreated her own camper from cardboards. Christina feels so proud for having such a smart and creative daughter with the biggest heart and an adventurous free spirit. It really seems like the next diva is on the way.

Accompanies Her Mom On Various Events

The adorable daughter of Christina Aguilera and Matthew Ruftler, Summer Rain often accompanies her mother on her musical tours and shows. According to Aguilera, her daughter’s presence near her encourages her to perform better and enjoy her every moment fully.

In 2018, Christina Aguilera’s daughter, Summer Rain Rutler, shared the limelight with her mom in Saint Louis, Missouri. But, then 4-years-old Summer did not grab the mic and begin singing along with Christina. Even though she acted shy, Christina revealed on one of her Instagram posts that the spotlight is exactly where Summer wants to be.

Apart from accompanying her momma on musical tours, Summer Rain enjoys traveling to various places with her parents. She also often goes to her dad, Matthew Rutler’s workplace with her mom. Her parents also feel glad to take her to their workplace as they want her to know what her parents do for a living.

The gorgeous little girl, Summer Rain Rutler, is the second child of Christina Aguilera. She has an elder half-brother named Max Liron Bratman from her mother, Christina Aguilera’s marriage with Jordan Bratman. The former pair, Aguilera and Bratman, welcomed their child, Max, on 12 January 2008.

Both of Christina Aguilera’s children, Summer Rain Rutler and Max Bratman, share a great bond with each other. They love to spend their quality time together going on vacations with their parents, accompanying their mom and dad in public events, and doing fun activities at home.