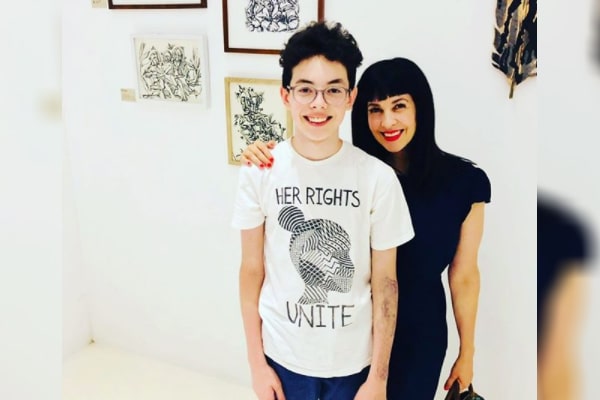 Grey DeLisle is a voice actress, comedian, and singer-songwriter. Her roles include Samantha ‘Sam’ Manson from Danny Phantom, Mandy from the Frim Adventures of Billy & Mandy. Besides those, Grey has given voices to video game characters such as Amanda Valenciano Libre in Metal Gear Solid: Peace Walker.

The talented voice actress started her career in 1983, gaining massive success. Besides professional victory, Grey DeLisle is a doting mother of three kids from different marriages. Today, we will be tailing Grey DeLisle’s son, Tex Hammond, with ex-husband, Murray Hammond. Thus, let’s get our mind blown.

An apple never falls far from the tree. Such is the case with DeLisle’s son, Tex Hammond, with husband, Murray Hammond; like a mother, Tex is also an actor who has appeared/ offered voices in a dozen movies.

Born on January 31, 2007, in Los Angeles, California, as Jefferson Texas “Tex” Hammond, Tex Hammond has fourteen acting credits on his IMDb. He has voiced The Show Must Go On!, Listen Out Loud Podcast as Lincoln, Goldies as Petey, Miraculous: Tales of Ladybug & Cat Noir, Glitch Techs, etc.

Furthermore, the 13-year-old has credits for The Loud House, The Casagrandes, ¡Viva la Revolución! , Vampirina, and many more. Grey DeLisle’s son, Tex, is shaking the world within two years and has a bright future as a voice actor. Moreover, his cute face can be a bonus for his acting career.

A Young Artist With BIG Perspectives

Typically, parents would expect their kids to play with their monster trucks or kill some zombies on 13. But Grey and Murray Hammond’s son, Tex, already had two solo exhibitions by 2019 and is preparing for another COVID-19 themed show.

According to Hammond’s official site, he loved art since he was young. He uses unusual material for his artworks as he believes it’s an opportunity for him to reuse and recycle things thrown in trash cans. Impressive!

Hammond’s first show, ‘Portrait of an Artist,’ showed his promising talent as a young creator. DeLisle’s son, 12 at the time, illustrated his favorite artists’ portraits in their style, all while hinting his unique aesthetic. The show was held in Tex’s school in West Hollywood and donated 100% of the school’s visual art program.

Moreover, Tex Hammond’s second show, ‘Mouth,’ was held in January 2020 at the Substrate Gallery in LA. Hammond’s son initiated his experimentation with painting on found objects from this show and helped raise charity donations.

Tex Hammond’s parents, Grey DeLisle and Murray Hammond were married in 2002. Both DeLisle and Hammond are in the entertainment industry. As stated above, DeLisle is a voice actress while Murray Hammond is a member of the country band Old 97’s.

Grey DeLisle and Murray’s courtship and wedding were featured in A Wedding Story and welcomed their first and only kid, Tex, in 2007. Unfortunately, the pair divorced when Tex was only 3.

Hammond’s mother, Grey, then got married to Jared Griffin, and the two married on June 27, 2012. The former pair welcomed a son Harlan Roy Griffin in 2014 and a daughter, Mariposa Ruth Griffin, in 2016. Unfortunately, the couple ended their marriage the following year.

Tex is living a luxurious life gaining massive success. Let’s hope he continues to progress and achieve more in the coming days.

The name Jefferson means Son Of Jeffrey, while Texas means Friend and is of Native American origin.