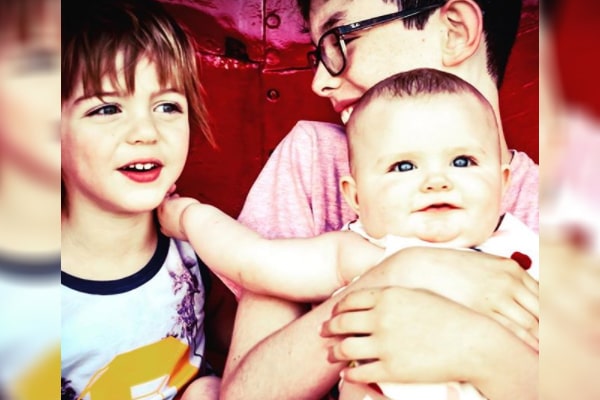 Voice actress Grey DeLisle is known for her roles as Vicky from The Fairly OddParents, Mandy from The Grim Adventures of Billy & Mandy, Riley Daring from The Replacements, etc. Besides that, she also sings and has released seven albums, including The Small Time, Homewrecker, etc.

Besides having a thriving career as a voice actress, singer, and songwriter, Grey is a proud mother of three. She was married thrice and welcomed three adorable kids from the last two marriages. Hence, we shall talk about Grey DeLisle’s children in this article.

Aforementioned, voice actress Grey DeLisle was married to Murray Hammond for eight years from 2002 to 2010. They were busy building their career throughout their marriage and welcomed only one child, Jefferson Texas “Tex” Hammond, aka Tex Hammond, on January 31, 2007.

DeLisle’s son, Tex, turned out to be one of the most talented among three kids. The fast-growing kid is already following his mother as a voice actor. He has voiced several characters for shows like The Loud House, Prey: MoonCrash, Broody, Glitch Techs, Goldie, etc.

According to Hammond’s IMDb, he has fourteen credits as a voice actor. Furthermore, Grey DeLisle’s kid, Tex’s career growth as a voice actor, is commendable but so is his artistry. The 13 y/o has had two shows showcasing his beautiful works and helped raise money for charity.

Moreover, Tex can merge his eccentric techniques with other artists’ styles, which shows his caliber as an artist.

Well, DeLisle’s son, Tex Hammond, with former partner, Murray Hammond, is snowballing and succeeding at a very young age. Let’s hope the pace of success never halts, and he continues to express himself via color.

Welcomed A Son And A Daughter With Jared Griffin

As mentioned, Grey DeLisle is a proud mother of three who welcomed her youngest one in 2016 with her third husband, Jared Griffin.

DeLisle met her ex-husband, Jared, via twitter. God Bless social media. The former couple tied knots in 2012 and announced the good news on Twitter itself. The marriage resulted in two beautiful kids, son, Harlan Roy Griffin, in 2014, and daughter, Mariposa Ruth Griffin, in 2016.

Happy mother, DeLisle, announced her baby girl’s entry via social media and continuously boasted about her via Instagram. Since DeLisle’s children are small, they are mostly kept away from the public’s scrutiny. However, the creative heart seems to run in the family.

Despite sharing half-blood, Grey DeLisle’s children are relatively close to one another. She proudly uploads pictures of her three kids spending time together.

Furthermore, despite failed marriages, DeLisle and her former partners seem to have agreed for joint parenting. Because Tex, Harlon, and Posie are all underage, the father figure is immensely important. Hence, Grey DeLisle’s kids are enjoying the itsy bitsy moments of two holidays.

Let’s hope Grey DeLisle’s children grow up into fine and kind human beings with comprehensive perspectives of the world.

Jefferson means Son Of Jeffrey and has an English origin, while Texas means Friend, and is of Native American heritage.

Similarly, Harlon means rocky land and has German/English origin. Likewise, Roy is kind which has a French basis.

Lastly, Mariposa is a Spanish word for butterfly while Ruth means Friend and has Hebrew origin.