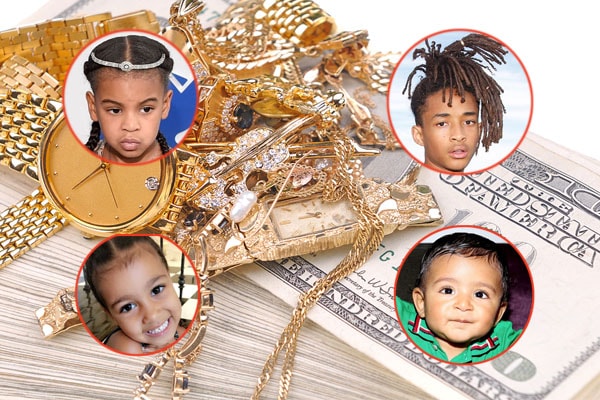 You don’t have to be born to a rich and successful parent to make a name for yourself, but you can’t argue that having a rich and powerful mother or a father does have it’s perks. Having a silver spoon enables you to do and have things as a kid that others can only dream of.

Those who have that silver spoon live a luxurious life and their fashion choices are off the charts trendy. They embody the glamour and royalty that a ton of cash can bring into our life. Here we will look at 10 of the richest kids of celebrities and see how they choose to live their lives.

When your father is one of the richest actors in all of Hollywood, life becomes very easy indeed. That is exactly the case for Tom Cruise’s daughter Suri Cruise. Tom Cruise is worth a staggering $550 million, and her daughter enjoys some of that sweet cash.

She is always seen wearing a stylish and fashionable outfit. She reportedly has a closet full of clothes worth anywhere from $1 million to $3 million. She has a monthly clothing budget of $15,000!

One of the most recognizable faces in Hollywood, Jennifer’s $360 million fortune means her kids Emme and Max have a pretty easy life. Add to that their father and Jennifer’s ex-husband Marc Anthony is also worth $40 million, the kids have a luxurious life indeed.

Jennifer just recently bought 8 acres of land worth $40 million and she and her kids have a luxurious 7 bedroom house over a 14,000 sq. feet of land. Life is indeed magnificent for Lopez’s twins.

When your mother is the best-selling female artist in the history of Billboard, you know life is going to be easy for you. That is the case for Mariah Carey’s twins, Monroe and Morrocan, whoa are living a fabulous life so far.

With Mariah worth a stunning $520 million, her twin children have made the most of it. The cribs for these twins cost a whopping $3600. Monroe and Morrocan are regularly on trips with their mother, most recently on a safari to South Africa.

Daughter of the stunning actress Salma Hayek, Paloma Pinault has chosen to carve out her own life. Rather than slash the cash that her mother’s $85 million net worth and her father Francois-Henri Pinault’s business empire of $17.3 billion, she has decided to become a chemist at such a young age.

Paloma makes slime and is known for tweaking her formula to fit the needs of kids and they are very popular too, with plenty of kids in school buying them.

Jay Z and Beyonce’s combined net worth is well over a billion dollars. That’s mean their daughter has all the wealth in her hand to enjoy her life. That is exactly what Blue Ivy does as she is seen wearing stylish Gucci outfits costing thousands of dollars.

Blue Ivy travels to places in a helicopter like a princess. In addition, her parents just bought a stunning house worth $88 million, and life just got easier for Blue Ivy.

When you’re the kids od the biggest celebrity, life can be pretty glamorous. Kim is worth over $350 million, and her kids have made good use of that cash. Kim’s daughter North had a birthday party in Disneyland and owns a mini Lamborghini.

The kids have a $128,000 worth playground and travel to many luxurious locations. They have an incredible life indeed.

Jaden Smith might have enjoyed his father’s $250 million wealth, but now he has managed to earn a ton of money on his own, collecting a net worth of $8 million. He has been acting in many movies and earning a truckload of money.

He is also the face of Louis Vuitton. He drives around many luxurious cars, including a Tesla Model X, and looks ready to become a superstar.

Ashad Tuck Khaled is already an executive producer and produces his father DJ Khaled’s albums. At the age of just 2, he has accumulated a Net worth of $2 million and is probably the richest kid in the industry right now after Jaden Smith.

He has his own special edition collection of Jordans and wears a $100,000 Swiss Watch. He is set to a superstar just like his father in the years to come.

Elton John is music royalty. He and his husband David Furnish have a combined net worth of half a billion dollars and their sons Elijah and Zachary are set to make the most of it.

Elton has said that he’ll fulfill all basic needs of his kids, so his sons are set to have a luxurious life. He takes them on vacations all over the world, most recently France.

Nobody has a more luxurious life than the royal kids. And that’s the case with Prince George and Princess Charlotte, kids of Prince William.

Geroge and Charlotte are worth $3 billion and $3.8 billion respectively. Will all the property, titles, and a glamorous lifestyle, there’s no competing with the royal kids and it is pretty evident.