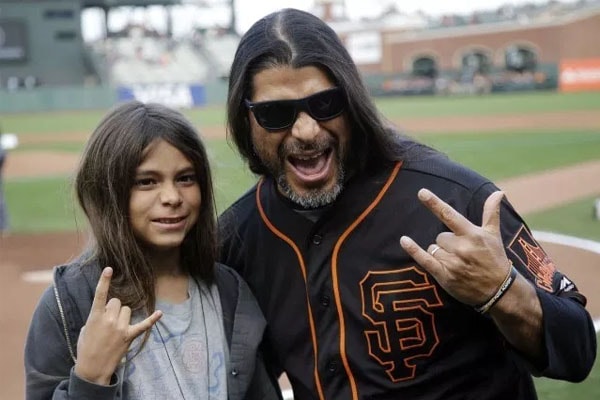 The young and talented Tye Trujillo is Robert Trujillo‘s son whom he had with his wife Chloé Trujillo. He was born on July 21, 2004. Tye has a younger sister Lula Trujillo. Tye is a very extraordinary child because he has basically mastered to play bass guitar.

Tye’s father, Robert is Metallica’s bassist-guitarist. Not only is he recognized as a guitarist but he is also an American musician and a songwriter. Tye was born in a musical environment that focused on heavy metal. His father was a key influence in Tye’s life. Perhaps Robert Trujillo’s son has seen his future as a famous bassist-guitarist just like his dad.

Tye is very hard-working and sedulous. The young boy began to play bass guitar when he was 6 years of age. It seems as though Tye was always attracted to music, specifically bass guitars. Seeing his father create magical music from the bass guitar, he must have gotten into it. You may be very amazed to hear but he has performed a solo bass during KORN’s 2017 tour with Ray Luzier.

Similarly, the legendary bass guitarist, Jaco Pastorius was his inspirational idol. The genes and nature of Robert Trujillo seem to be similar to his son because it looks like Tye has already become a professional artist.

In a similar manner, he has performed as a member of The Helmets band during Lollapalooza festival. But this is just a start for Tye, he has many miles to go to achieve a huge success. Robert must be very proud of his son as he has continued his legacy.

Robert Trujillo may want Tye to become far better than him. Looks like Tye’s dad is the motivation and dedication for all the talents of a bass guitarist Tye possesses.

Tye Trujillo has been catching everyone’s eyes and mind with his spectacular bass tunes. No one can believe that the kid is playing such an extraordinary bass in the band whereas many of the kids of his age are still uncertain about their future and career.

Seems like Tye has already created a huge fan-base. He might be looking forward to becoming one of the huge artists in the music industry. We wish to see him do the impossible that no bassist-guitarist has ever done.

According to the English language, the word Tye’s meaning is “from the enclosure”.