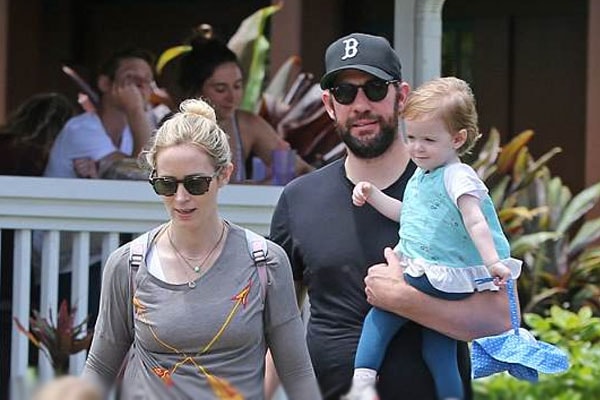 To date, Violet is the youngest child of John Krasinski and Emily Blunt. She has got an elder sister named Hazel Krasinski. And being the youngest one, everyone adores the little Violet. Like Hazel’s birth, John announced the arrival of his second child via Twitter. Though this time he waited for almost two weeks and didn’t upload any image.

What better way to celebrate the 4th… than to announce our 4th family member!!! 2 weeks ago we met our beautiful daughter Violet #Happy4th

Well, Violet might be the smallest in the family, but her actions and behaviour don’t seem like that. John shared a funny story about his daughter Violet while he was in The Ellen Show. Violet Krasinski’s father John Krasinski stated that when he tried singing a children song titled ‘roly-poly roly-poly,’ all of a sudden the little Violet went “Yeah, baby” which kind of came as a shocker to John. John even asked his wife Emily if she knew what their daughter was singing but had no clue.

Though later on when the family was travelling somewhere, the same song did play in the radio where a man goes “Yeah, baby,” and John stated that his daughter  Violet gave him a weird look.

We are not sure about Hazel, but the cute Violet is definitely the mini version of her glamorous mother Emily Blunt. The mother-daughter pair has similar blonde hair.

John and Emily are the types of celebrity parents who tend to keep their little one away from the media limelight. Emily is yet to have her social media account and John doesn’t upload photos of his children on his social media platforms.

The name Violet comes from Violette, an Old French word. It is also a type of colour.